I purchased the Yale Assure Lock Touchscreen Keypad with Z-Wave module off amazon a few weeks ago in preparation for getting my front entryway door replaced with a new one. Installation and setting up the software to pair with my Ring main base station was a breeze. I had seen a youtube video by another user before who had it running with his Ring system and nice to see you can not only see the status of your lock from the main dashboard but you can lock/unlock from there too. So far all the features in the app integration seem to work well without having to go through the menus using the physical keypad on the door which can be tedious. It’s nice to have one less app to manage another smart device in my home and Ring integration for this lock is very good so far.

One feature that would be nice for the future is if the Ring app can allow you to setup a push alert if the deadbolt has been unlocked after “x” amount of time. This way is someone leaves the house and forgets to lock it you get an alert and lock it remotely via Ring app.

Similarly it would be great if you can do the same for the alarm contact sensors too. Right now you can only setup open/close alerts but being able to set a time for them to send a push alert say after 2 mins if your front door contact sensor remains open.

Anyways, just wanted to let others know that the Ring integration with the Yale Assure Lock Touchscreen Keypad works great with the Z-wave module. 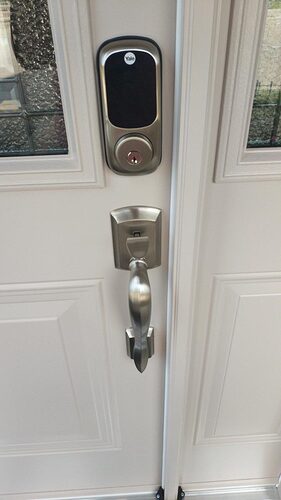 How are you linking Z-Wave to Ring?

I believe all Ring alarm base stations support Z-wave. I just added via Ring App under Devices --> Locks but you have to check to make sure you lock is officially supported.

I have 3 Yale YRD210 locks integrated into Ring. These were originally purcahsed with a ATT Digital Life security system that I replaced with Ring Alarm. I had to replace the radio modules with Z-Wave as they originally had custom ATT DL modules. To confirm another post, the Ring Alarm Base has a Z-Wave hub in it and that is where you connect “works with Ring” Z-Wave devices. These older model Yale Assure locks work just fine with Ring.

Just bought the Yale SmartLock YRD256-ZW2-605. So to confirm… I can have the Ring Alarm disarm the system when I enter the code on the lock and it can autolock and arm alarm when I touch the pad to lock the door?

Is there a feature through Ring or the lock to Auto-unlock given my location (ie I have my cell phone with me and i just pulled into my driveway and I’m walking to my door, and the system will disarm and unlock the door without me touching anything?

The Yale Assure lock can be set to arm the Ring Alarm system in one of two ways: a. touch any key to lock the door and have the alarm set to away - OR - enter your code to lock the door and have it set Ring Alarm to away. You can have the Yale Lock also turn off the Ring Alarm when you enter your code to unlock the door. At this time, Ring and Yale have not implemented geofencing to unlock the door on a proximity of your phone. I would imaging that is a feature on the upgrade roadmap at some point. While there are other locks that can do this, it would likely require your lock be connected to a hub of some kind that also has bluetooth implemented or be connected to the internet so your phone locaation informaiton can be passed through. There are good and bad points to this feature as some would argue that someone could steal your phone and have ready access to your home without some 2nd validation that its you coming to the door. In that case, it would be just as handy to simply enter your code in the door lock. Others find that feature very handy, especially wiht small children in tote of bags of groceries, etc. Even if you had a voice assistant on your phone doing the request would likely require you vocalize or enter a code to unlock. Almost all alarm systems require a positive alarm shutdown code be entered somewhere along the way to prevent illicit control of the alarm system.

I couldn’t get my Yale 256 Z-Wave smart lock to pair with Ring. I’m new to Ring Alarm, Z-Wave and smart locks in general, but definitely a tech nerd.

At this point the Ring app tells me to tap Add and enter the master code on the lock followed by #-7-#-1-#. **Problem is there is no “#” on the smartlock keypad, so at first I had no idea how to enter that. ** As soon as you hit Add it starts the search, which of course fails with a Device not found error.

**Turns out the 7 and 1 are Network Module menu selections on the smart lock itself!! **

For the old school nerds like me, the Gear is positioned where the phone dialpad # would normally be, so I suppose Ring used # because the instructions were in text. Why Ring doesn’t insert a graphic with a “Gear” in their instructions though… Please update the Ring App instructions to include a gear symbol instead of #. 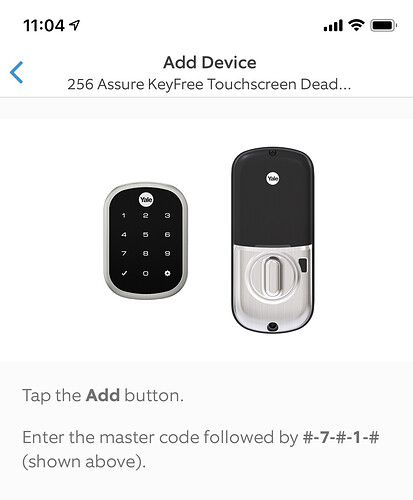 I had the Yale touch pad with key installed several years back with the ATT DLC Security system. Now I want to use the Yale lock with my ring. What module number was purchased to replace the att proprietary module. Thanks, Howard

I spent forever looking and eventually confirmed and purchased US2.0 CP2-5-3 YRMZW1-US directly from Yale. Availability from Amazon was spotty at that point. I also had to call Ring Support for assistances as my locks were not de-registed from the DLC controller before it was removed from the house.

I am trying this but i hit gear 7 then gear but only the number 3 the comes up. Has this issue happened to anyone else? I have a model YRD226-CBA-619. Anyone know what I am doing wrong?

Nevermind. I have the bluetooth module installed, duh! I need to exachange that module with the z-wave …

run10K31, I have the same problem. I research and I did not find a way to connect to Ring