I purchased a Spotlight Cam and a Hardwired Kit during the Black Friday sale and have had it fitted recently, and it seems like the Hardwired Kit is somehow not compatible with UK wiring? As when I twist the camera into position the Pogo pins are burning holes into the pad and stopping the camera from working.

For those not familiar with the Hardwired Kit, it’s essentially a Wiska junction box with a proprietary cover so you can attach the Spotlight Cam. You connect the cables inside the box with the supplied Wago clips, but you’re told not to connect the earth cable from the supply, and a cable from the camera is left similarly unconnected.

I twisted and locked the camera into place and it worked for about 10 seconds, then died. I checked everything and it seemed ok, the. Then I noticed this… 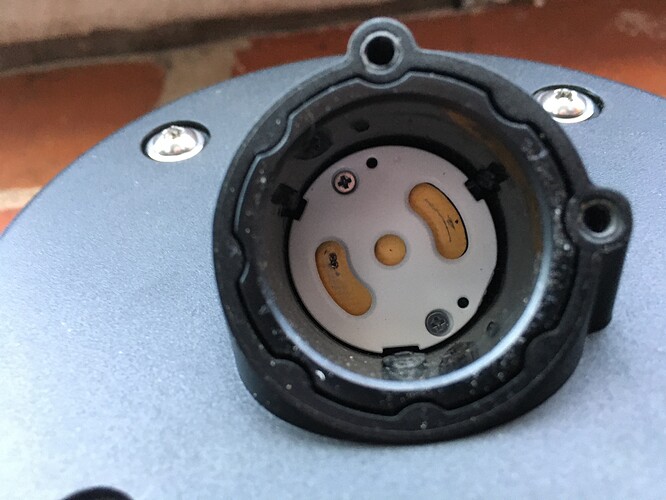 I’ve read that the Spotlight Cam Mount found in the US is not sold in the UK due to “compatibility issues” (see UK Hardwired spotlight camera - Possible?) and I’m starting to think the same applies to the Hardwired Kit. I cleaned up the pins and tested the camera in the regular wired base supplied with the Spotlight Cam and it worked perfectly, so the camera isn’t at fault.

The same electrician which fitted it has tested the circuit and there are no faults. He suggests that the Pogo Connector Collar (the bit which the camera locks into and has the wires coming out the back) could have badly soldered joint inside, but the part isn’t serviceable as it’s filled with epoxy.

After a 35minute phone call with Ring Technical Assistance, where I was asked no less than 3 times if I would like to purchase the entire Hardwired Kit again, I was told the Pogo Connector Collar isn’t available as a spare part, either as a FOC replacement or purchasable item. After being told that nothing further could be done and it was suggested I simply put the Hardwired Kit aside and mount the Spotlight Cam as it comes (but I have no external socket, hence the Hardwired Kit). Only after I queried if I could return the Hardwired Kit for being faulty did the operator say they’d pass on my details to their billing department who would be in contact shortly. That was a week ago and I haven’t heard anything, and I’m hoping someone reading this has had a similar problem and can offer assistance.

Hi @Rushview. Thanks for sharing with in-depth details what you’re experiencing with your Spotlight Cam and the Hardwired Kit. I know you mentioned reaching out to our support team before, but since the Community is a neighbor-to-neighbor forum rather than a direct line to support, you may want to reach out to them again. Make sure to let our support team know what type of physical damage has been caused and feel free to reference this post when you contact them so they can see everything listed out. As we’re not a direct line to support, we can’t look into your account or document this further, but our support team can.

Please give our support team a call at one of the numbers available here regarding this safety concern with your Spotlight Cam. We’re taking additional steps to protect our team and help reduce the spread of COVID-19, so this has resulted in longer than normal wait times. If you are outside of the US, please read our response to COVID-19 here to see how to contact support.

Hello @Rushview,
Are you switching off power to the hardwired kit before attempting to plug in the spotlight cam into the socket?
The spotlight cam fits into a similar socket on the original base that it came with. Did you face similar issues with that base too?
That holder socket is sealed but the assembly itself is removable so Ring should provide an option either to replace it if it goes faulty or make it available for purchase as a spare part in the accessories section of the Ring Shop.

@Caitlyn_Ring
It’s interesting that you mention “feel free to reference this post when you contact them so they can see everything listed out.” I have spoken to several advisors of your support team and have always mentioned this forum when reporting an issue. Not one of them seemed to know about this forum let alone have access to it. Maybe it’s the first level support that are unaware. Don’t get me wrong, the support team are doing good job. They follow the process to a tee.
For eg. I “referenced” the floodlight mount issue which has been raised time and again on this forum but in vain. Likewise for many other issues that fill up the bulk of this forum. It doesn’t make any difference to the support team or the supervisor or 2nd level support who do not even so much as acknowledge this forum when mentioned. It would be really useful if they did. It would save Ring, it’s customers and it’s support team a lot of effort and bother and lend a lot of credibility to this forum.
Hope you understand.

The power is fed from a fused switched spur, which I only turned on once the camera was locked into position.

I’ve tried it the base which is supplied with camera and there’s no issues with that at all.

Still no contact from Ring as the service rep promised.

@Rushview
This does not auger well for the Hardwired Kit. It’s a really good and versatile kit and many may find it useful for several purposes when used with the Spotlight Wired. Since the holder is removable, it should have been sold as an spare/part on the Ring Shop specifically when it is prone to developing faults.
Let me check my Hardwired Kit if has similar issues and update you.