Hi all; Relatively new to Ring spotlight battery cameras here. I have one set up on my front porch and am having problems with delayed video start. I have discussed this at length with Ring support and thought perhaps users might have some ideas. Here is what is happening. I have advanced motion detection on, max frequency, spotlight on with motion at night, HDR, not people only, and custom motion zone to encompass region of motion desired. Very simply, during both day and night time, you must be probably over 6 feet into the motion zone before there is any motion detected (as evident by the spotlight coming on at night). Then, video starts to capture ONLY if you further encroach into the zone. So two problems - motion is not detected until well into motion zone, and then video not captured unless you further encroach! I even tried walking very slowly or just standing once motion detected to see if it was just a lag thing figuring motion detection is battery powered, but video capture is wifi powered. If I just open the front door from inside the house, both motion and video starts immediately as it senses the door opening and there is history event and video captured in the app! This is baffling. I thought perhaps it was a wifi signal problem, in other words stronger signal to camera if opening front door and hence both motion and video start immediately, but ran the wifi test outside near camera and all checks out ok. In fact, outside by the camera it is showing over 40 Mbps signal. Note In all cases done at day or night, (except for opening door from inside) there is NO history of any event in the app. No notification. Nothing. Unless of course, like I say, you continue to deliberatively encroach further into the zone.
One final clue is that at night, it captured a car going down the street way outside my set boundary area which doesn’t make much sense. Ring has suggested replacing the units but I can’t help but think there is a solution, or something that is being missed. Have others confirmed their spotlight battery cams actually capture video starting at the boundary of motion zone they set?

It sounds like you may need to adjust the camera angle. The motion sensor is located at the bottom of the camera, and it’s possible that the camera is angled in such a way that’s reducing the range of the detector. Also note that the PIR sensor used in these cameras has difficulty detecting motion that is moving directly towards or away from the camera. It works more effectively if it is set up in a way that most of the motion will be at an angle to the camera, if possible.

I have motion zones set up on both of my battery Spotlight Cams, and they seem to work pretty accurately. Another thing to try is to create multiple motion zones to cover your desired area instead of one large zone. I’ve seen some other posts where people have had success doing that.

Wow Pdeethardt. I believe you may have solved the issue. None of the three agents or so I spoke with during hours of troubleshooting with Ring on the phone mentioned this. I did in fact have the camera pointed a bit down in order to show both the front door and step. I was assuming that if you could set up a motion zone anywhere shown in the still photo in the Motion menu, the sensor would therefore detect motion anywhere in the zone. However, now you have helped me to understand that just because the camera can see a certain area, doesn’t mean the sensor will detect motion in that area. When I looked at the plane of the sensor device, it was indeed not level, as indicated it should be in the manual. After tilting the camera up a bit and therefore making the motion detector more level, it did indeed start detecting AND initiating video capture closer to where I set the boundary for detection. This now explains why it was detecting motion only after proceeding well into the motion zone, but still not clear as to the lag then for subsequent video capture - but perhaps the two are related in a more complex manner than I think. Right now it is behaving correctly during daytime - getting notifications and video showing initiation upon entering very close to set boundary of motion zone. The only thing is now I’m not seeing as much of the front door area/step as I wanted - but I guess this may have to be a compromise as now I’m definitely getting more of the walkway approach. I will need to test tonight as well.

By the way, do you happen to have one of your cameras near a porch light that illuminates the camera? I have found that even with spotlight set to ON at night with motion, it does NOT come on. I am quite disappointed with this. I can understand the photosensor might think it is daytime with a porch light on, but since the camera “knows” it is night from the time stamp, it should be smart enough to turn on the light as directed by that setting. And the overhead porch light is only 25W !

I really appreciate all your help and will report back with night results later.

Hello, I have completed the night time testing with same corrected tilt conditions as above and spotlight turned to ON with motion. The result is the same as initially reported - the spotlight comes on at the motion zone boundary but then you must walk well within the motion zone for any video to start being captured. I have played around a lot with the advanced motion zones including creating two motion zones that basically encompass the same total area I want to capture - but simply are adjoined to encompass that area as recommended by Pdeethardt. I am baffled why the system works correctly as expected during day with video starting as soon as you enter the motion zone, but not at night. Isn’t video supposed to start being caputured as soon as you enter a motion zone regardless of day or night time? Can a Ring engineer provide some clues as to what is going on? I bought the two pack and both cameras are behaving the same so it would be unlikely both are defective. Would a user be willing to try this experiment - again, do you get video capture at night with spotlight battery cam just as soon as someone enters into the defined motion zone, or do you need to proceed well within the zone before it starts to capture?

Hi @CountryTime. The Ring Community is a neighbor-to-neighbor forum and is not a direct line to support, however I’m happy to take a look and offer some helpful suggestions here. It looks like you’ve run through a lot of the setting adjustments already, as well as adjusted the Camera’s angle which is a great step. Regarding your concern with the motion detection at night, can you please share a screenshot of the Motion Zones from your Camera during the day and at night? This will help me get a better idea of what you’re seeing on your end.

Hi Caitlyn. Oh. I thought the forum was to get help from both Ring technicians and fellow users.

Regarding the screenshot, can I do this right from the app? I am new to all this. Also, are you saying motion zones for day can be different for motion zone at night?

OK: I took a photo of the motion zones displayed on cell phone with my separate camera and then made some notations in Paint. You can see I have labeled the location of the battery spotlight cam on soffit area just above door, in corner. I have set up two zones per advice in this thread but the results have not mattered whether I have one large zone or two smaller zones covering the same total area. You can see where I have notated daytime video starts as expected as soon as entered the outside boundary of the zone and going down path. This is also approximately where the spotlight turns on at night BUT the video during night does not start until one proceeds way into the zone - almost to the front door. Looking forward to analysis. 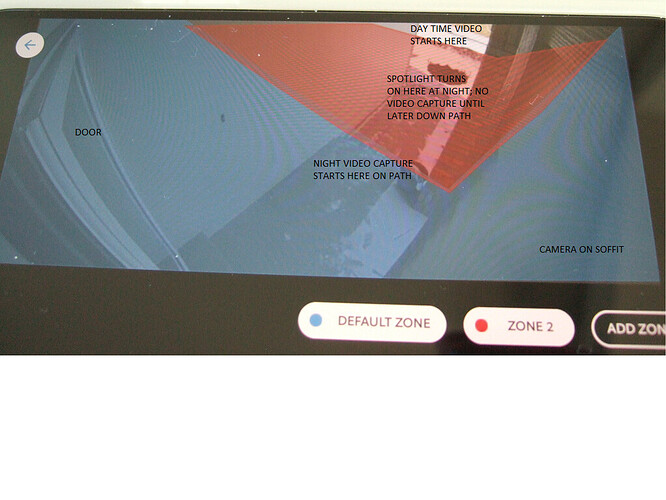 @CountryTime Apologies for any confusion, but no members of our support team will be reviewing or assisting on the Community as it’s meant for neighbor-to-neighbor interaction and discussion. I’d also like to clarify that there are not different Motion Zones from daytime to night, but the lighting will be different which can impact the motion detection. You can read more about how the motion detection in Ring devices works in our Community Post here. Your Camera detects approaching visitors with advanced motion detection technology. This means that your device does an initial scan of the motion zones you draw and remembers this view. Then it continues to monitor the zones looking for valid motion to occur inside your custom zones.

I hope this information is helpful. For any questions or concerns you’d like to raise with our support team directly, you can give them a call at one of the numbers available here. We’re taking additional steps to protect our team and help reduce the spread of COVID-19, so this has resulted in longer than normal wait times. If you are outside of the US, please read our response to COVID-19 here to see how to contact support.