Anyone else think the pro 2 LED ring is too dim? It is way dimmer than my Doorbell 3. When I was setting it up the app asked me if the white LEDs were spinning. During the day I just couldn’t tell! The white ring is dimly lit at night and brighter blue when rung but it’s very very different to my other doorbells. Is mine defective?

Mine is the same. LifeHackster on YouTube (the guy that reviews a lot of Ring kit) noted it as part of his review how dim it was. Compared to the Pro 1 and the new Wired Doorbell that I have seen some reviews of the LED is so dim on the Pro 2 it’s virtually useless. You can’t see it at all in the day and at night the glow is so weak. Will be a real issue during set up for folk who aren’t as tech savvy and trying to see what the status is.

I’m hoping it’s a firmware thing and can be fixed via an update. If not then Ring are going to have to replace a whole bunch of Pro 2’s.

I agree, it’s way too dim. I had to go through the set up a few times before I realized that it was so dim, I just wasn’t seeing it.

Agree, ours is the same. During setup it asked if blue light was spinning, I know I’m getting old but I couldn’t see a thing and still can’t in daylight hours

I did a further comparison with a neighbours Pro 1 as well as my old Doorbell 3 Plus and the difference is massive. The Pro 2 LED ring is virtually invisible. It is probably a firmware issue as I doubt Ring would have let the device through testing as is. Its annoying but on a new device you get the odd thing for the first few weeks/months till firmware catches up. However if there is an actual hardware issue with the first batch of these then Ring are going to have to replace them.

Would be good to get some input from the Ring staff on this. Realise it’s early days and it might be getting looked at but would be good to know if it’s something which can be fixed via firmware. It’s impacting every Ring Pro 2. Every review I’ve seen the LED is like this and I assume every unit delivered so far has the problem.

I have raised this issue with support via the Ring UK twitter. They asked for photos/video of the issue and I also shared links to the posts on the forum about it. They said they would need to “pass it on to the correct team” so who knows.

Hopefully will get a result but not holding my breath.

I have same issue. At moment of initial power it was bright. But then after I pressed setup button and gave it network access it went very dim. So dim I thought the device was not working, but it was working properly I just could not see the LED.

Update: I contacted ring support and I provided 2 photos one prior to pressing button and one after. The support case is still open and supposedly being routed to engineering for investigation. The support agent said they will contact me after investigation and if I want any updates to contact them by replying to the email they sent me since if I call back to support they will just open another case. It seems they do not have an effective support tool if a voice call back just results in another case being opened. 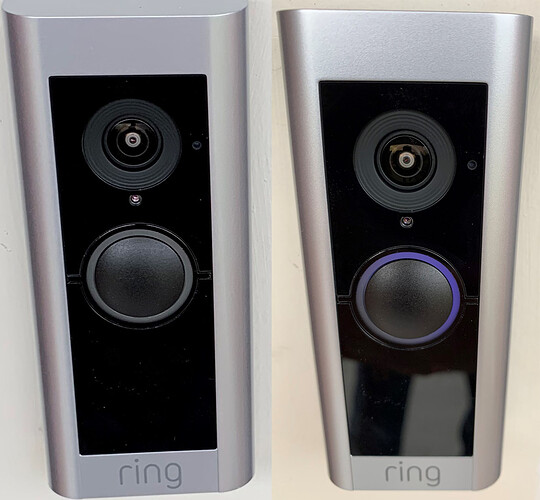 I also raised with support but they didn’t really consider it a defect. They offered to swap which was pointless so could only offer a feedback to the engineering team. I think Ring are going to stick their head in the sand on this one.

Ring are fully aware of this issue but haven’t comment on it yet. There are 2 things around this, one is aesthetic in that it just looks bad especially on their top of the line doorbell. The second is functional in that its so dim you cannot see the status light during set up, doorbell presses, error diagnostics etc in daylight so will cause a support issue. You have to see it in person to actually understand how dim the light is. Comparing to the old Pro 1 I would say the light is only about 10 - 20% as bright, its basically useless. A number of the tech reviewers are picking up on it as well. For me it can only be one of three things:

It was designed this way. I highly doubt this is case since why make it so much worse than every other ring doorbell when this is the top end device. Plus I don’t see it making it through testing and certification. The light is not supposed to be this dim.

Its a firmware issue and will be fixed via an update. This would be the ideal scenario as a fix can just be rolled out.

Its a manufacturing defect in that which ever third party builds these for Ring/Amazon (I think its Foxconn) has messed up and not followed specs/used the wrong LEDs. This is the worst scenario as there is no way to know how many are already manufactured and in the supply chain. If this is the case what will happen is the manufacturing error will be corrected (and might already have been) and eventually they will start shipping with the correct LEDs. That leaves the question will Ring then replace all the faulty units (I would be fully expecting a replacement as they are in effect faulty)?

It would be good if one of the Ring staff could find out a bit more and comment on this thread.

Hey neighbors. Thanks for bringing this to our attention. I’ve taken note of your concerns and passed this feedback to the appropriate team. I cannot comment on a timeline or expectations for this concern, but know that here at Ring, we are committed to always providing world-class service to all of our neighbors. Thank you.

I bet they’ll fix the LED ring. However, I have my doubts they can fix this with a firmware update. It’s far more likely this issue is the result of a hardware issue. LED driver IC, incorrect passive components used, incorrect LED voltage range used in production. These are far more likely than a simple software bug. They’ll fix it quietly and deal with early adopters on a case by case basis. My 2 cents on this issue.

@Tom_Ring Thanks for replying Tom. Good to know it is being looked at. Realise difficult to comment on timelines especially if it is firmware as that needs to be tested to make sure an update doesn’t break something else. However it should be fairly easy to identify if it is firmware vs a manufacturing issue. It would just be good to know if a fix is coming via firmware and if not will there be a process in place to replace the faulty units once the manufacturing defect is corrected.

I can barely see the LED light during setup and even at night! They need to fix this asap!

They do need to fix it ASAP. The fact you cant see it during setup is going to cause a lot of support calls to Ring from non techy users as they will think there is something wrong. I have older relatives for example that will follow the instructions to the letter, if they cant see the light they will either give up or call into support. When I was setting mine up I had a feeling there was something wrong and I ended up sort of putting my hand over it to block some of the daylight and then I could see the faintest of lights coming from it. A lot of folk will just think its broken. Plus when someone comes to the door yes there is the chime sound but the the lack of a visible spinning light isn’t great while the person waits for me to come to the door.

I realise this is not in your personal control @Tom_Ring but it has been more than 2 weeks since I created the thread and logged a support call. World class service would at least clarify at this point if it is firmware or hardware.

@jonstatt @Tom_Ring I have a feeling this is going to be a manufacturing issue as if it was Firmware it would probably have been confirmed by now that it was and at least Ring could then say its in progress. Manufacturing issue is the worst outcome so I am still hopeful that it is firmware related but we shall need to wait and see. I have had no feedback either from the case I logged.

@Tom_Ring Just wondered if there had been any more updates/feedback around this issue?

I suspect that many Ring Doorbell Pro 2 owners have a variety of “light”-related issues (as well as other, more serious) issues.

One higher-level Technical Support representative claimed I was the first person to report Ring Doorbell Pro 2 issues. I find this very difficult to believe. Perhaps it is because lower-level representatives are refusing to escalate calls.