Ring video doorbell 2 not powering up

Greetings, my doorbell chime is ancient but my parents seem to love it. It doesn’t have a “trans” terminal and instead has front, side, rear, terminal a, and terminal b. I currently have wires connected to terminal a and b, also the front and rear terminals have wires connected (I have two doorbells) and the side terminal isn’t connected. I’ve attached a picture of the chime board. 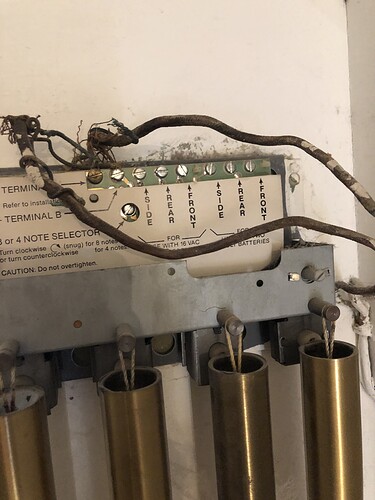 I currently have the video doorbell 2 and tried installing the pro. I connected the power kit between front and side (as instructed by Ring support). The doorbell powered on but my chime kept ringing continuously. I then yanked the wires from the front and rear terminals to make the chime stop. I then reverted back to the old video doorbell 2 and reconnected the front and rear terminal wires. The doorbell didn’t power on but the chime still kept ringing. I then tried switching the front and rear wires, but the rear chime now keeps ringing. My question is: is there a short somewhere? Or did I blow up the transformer?

What can I do to at least get the doorbell powered up again?

Any help with this would be much appreciated.

Great questions, @ele! Surprisingly enough, this scenario is something I’ve run into before. Ultimately, the type of chime kit, method of powering, and wiring configuration means this chime kit is likely incompatible. Here are our Chime Compatibility Lists, if you want to confirm the exact chime model there.