The key (but unoriginal) concept for this installation was to: “replace” the front doorbell button which activates the Chime module within the intercom system master station with a relay switch (see the wire diagram).

(1) I turned off the circuit breaker to my intercom system.

(2) I repurposed the two front door intercom wires running from the “Terminal Board” at the back of the Nutone master station because they run from the station to the front door.

(6) Turned back on the circuit breaker to the intercom system and performed an In-home Chime Setting as directed using the Ring app.

The Ring doorbell maintains charge and work just find. The old doorbell wires were left unattached (cap them if it makes you feel good).

Note: Picking the right relay can be tricky because my system runs off a single Nutone 105T, AC transformer (16VAC @ 15 watts) and I did not want to replace it or install a second transformer. After some online research, I found two choices that seemed reasonable: a 24VAC relay -_uxcell A14071800ux0297 35mm DIN Rail DPDT 8P General Purpose Power Relay AC 24V Coil W Socket or a RIBU1C Enclosed Relay (10 Amp SPDT with 10-30 Vac/dc/120 Vac Coil) from Functional Devices, Inc. Tried both but the uxcell 24VAC relay seemed to work better in my hands. See my wire diagram. _ The Ring Doorbell activates the relay which activates the Chime module and I hear the doorbell chime throughout the whole house as before.

Where can I find a wiring diagram or pictures of step 5. Thanks for your help

I initially posted a wiring diagram but I no longer see it. Therefore, I am posting an updated wiring image. 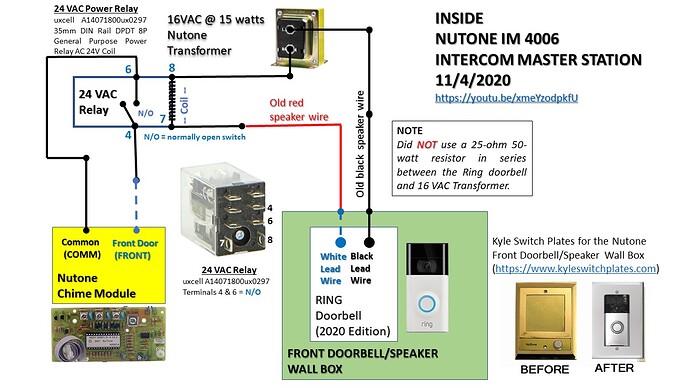 I hope this helps. Please post another message if it doesn’t.

You may also find this image useful. It helped me. It is from a posting on Amazon where I purchased the 24VAC relay. 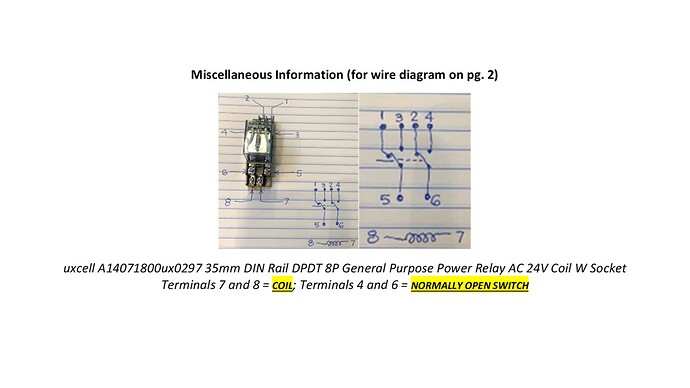 I used your diagram and steps to re-use a Nutone IM 3003. My system with the Nutone doorbell was working fine but I wanted to upgrade it with the new Ring Doorbell Wired ($59). I have the exact same transformer and I bought the relay that you recommended and used the old doorbell cable to the front door to connect everything. Found that the Ring Doorbell Wired when circuit was on had the blue light revolving very fast and the camera taking pictures every few seconds. The relay was also making a whining sound. I could not get the installation going and had to abort. The only difference I believe is your schematic uses another Ring Doorbell from mine so I’m not sure if the electrical/electronics are different and wouldn’t work for my product. Have been on the phone with Ring support for a couple of days but haven’t been successful getting it to work. They’re basically disavowing anything to do with a nutone. Any ideas what’s going on?
Thanks in advance

I used this same diagram. Does ring 3 need to be setup for digital or mechanical. It works but makes the relay buzz while the tune is playing throughout house. I also have 3 volts across relay coil when system it idle. If I unhook the ring outside. And just tap the two wires together the relay clicks for a second and the chime plays. As soon as I put the battery back in and hook wires up and push the ring button you hear relay going nuts while the tune is playing. One guy shows a power mod box across the relay coil terminals.

Sorry about your problem setting up your Nutone IM 3003. As you suggested the issue may involve:

Nevertheless, I think the key is the choice of the relay. You want a current that will power the doorbell and keep the battery (if your model has one) fully charged (and not cause the relay to hum) but a voltage low enough not to activate the relay and the chime until the doorbell is pressed and activated. 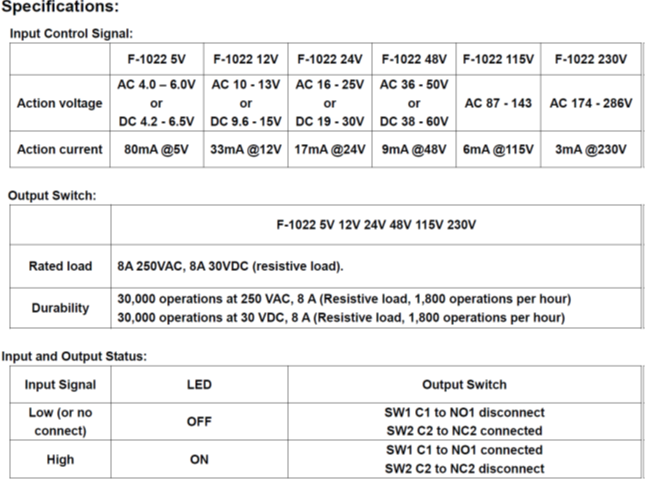 I think the key is the choice of the relay. You want a current that will power the doorbell and keep the battery (if your model has one) fully charged (and not cause the relay to hum) but a voltage low enough not to activate the relay and the chime until the doorbell is pressed and activated.

Also consider using a 50 Watt 25 Ohm Wirewound Resistor, as suggested by Ring (a variety are available on Amazon).

Do not forget to perform the “In-home Chime Setting” as directed using the Ring app. It really worked for me and it eliminated problems like what you are experiencing.