Ring Doorbell 2: "This footage is unavailable."

I’ve had the exact same issue, random little slots in the history that says “this footage is unavailable”. RING why is this happening. ?

Hey @Iseeyou and @Roshan4! I would start with uninstalling and reinstalling the app to see if that resolves this concern. If it does not, I recommend reaching out to our support team, at 800-656-1918, for more in depth troubleshooting.

I just noticed I have the same issue, there was just a hit and run infront of my house and I thought maybe I got the plates of the guy who drove off, but the video is unavailable for 13 min and the crash happened in that block of missing video…

Same exact thing. I installed a Ring Doorbell 2 yesterday and snapshots were working all day until 6:30 am this morning. Since then I see “this footage is unavailable” for around 60% of the day. There’s a few snapshots, but most aren’t there. Live view works great.

I atttached a screenshot of the app. All the black areas are “this footage is unavailable” areas.

edit: I called support and they don’t seem to understand the issue. They are claiming the Wifi isn’t strong enough to upload snapshots, but I was able to watch live 1080p video for 3 minutes without issue. Still snapshots require a lot less upstream bandwidth than 1080p video, so I doubt it’s the Wifi. It could be, but that doesn’t seem correct.

edit 2: support is useless. They are telling me I need to assign a static IP address to make the Wifi connection better which makes absolutely no sense. They are also suggesting I get a Wifi extender. I have a lot of devices on my Wifi network and none of them need an extender, which also would only really help if the Wifi signal was low, which it isn’t.

edit 3: I got escalated to second tier support who basically told me everything first tier told me was wrong and that the snapshot feature hasn’t officially rolled out so it may be having “growing pains”. That makes more sense than Wifi issues. 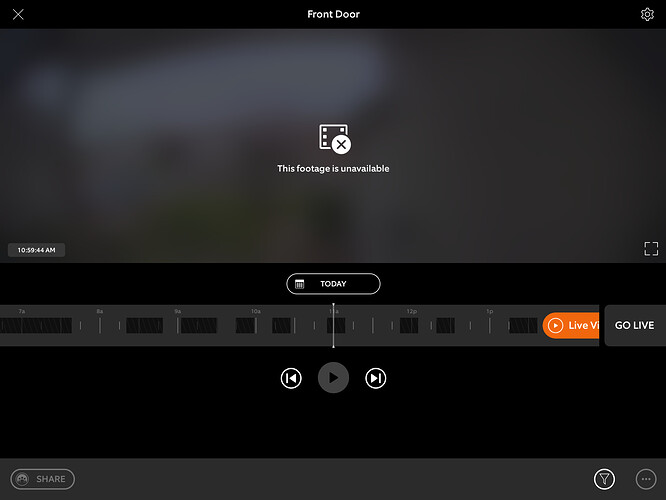 Wait. I have exactly the same problem. I thought it was my power problem but it is not. Please solve this

My footage unavailable for 20 minutes between the time of 11:40pm to 12:20am every night

I have exactly the same problem. Something is wrong with ring network. Always midnight between 11:40pm to 12:20am

Well, I be dam_ned! This morning when I reviewed the last night footage and everything was there. I now can see the other missing midnights footage up till midnight of Nov 14/15. I am now the Gene Gene the Dancing Machine…

I’m having the same problem it’s like an hour though of time maybe longer, I thought maybe somebody was making it happen like with a magnet or something, or am I just watching too much CSI?

Has anyone received a valid response from Ring concerning the deadzone time? Mine is from midnight to 11 am and then again from 2 to 5… This is with the newly installed ring pro… We had the non pro up previously. This seems to be a really important time to be dead air…

I reinstalled the app and it seems ok now, hopefully it keeps working and doesn’t slip up when I think it could be useful.

Thank you will try that.

I’m having the problem when viewing snapshots on multiple devices so I don’t think it’s related to the device I’m viewing this on.

At this point, snapshots work fine between 5 pm and 7 am. There are no gaps. Between 7 am and 5 pm, I’d say only around 25% or less of the snapshots show up. There’s gap’s all over the place, some over an hour. Basically it doesn’t work during the day.

Same issues here. More often than not ‘footage unavailable’ throughout the day. Evening’s are ok.

(I’ve reinstalled the app but no change yet)

My Door View cam had the same message for 7 hours today! I don’t see why I paid money for such a buggy product. Any time support are contacted about anything they seem to blame it on WiFi, seems the go to response.

I *believe* this is the first time it happened to me. From 5pm last night to 6am this morning. Over 12 hours of footage unavailable. Never seen this before. Not good.

Sorry to hear about these concerns. If you have not already tried, uninstalling and reinstalling the application is a great first step! It’s important to also check your signal strength via the Device Health in the app, whenever there is a concern related to video or picture quality. Check out our Community post about RSSI and how to optimize your wifi signal strength.

If the above does not resolve your concerns, I recommend reaching out to our support team, at 800-656-1918, for more in-depth troubleshooting. Please feel free to keep us updated on the results as I will be sharing this feedback with the appropriate teams.

This answer is unavailable.

I have the same issue. There are footages missing throughout the day. @Ring: Please fix the issues. 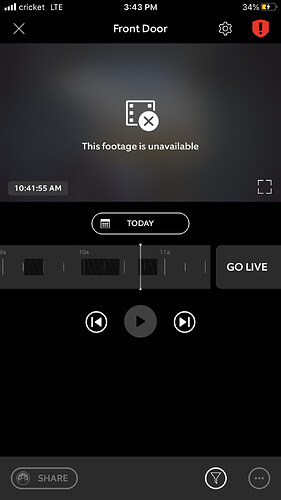