Ring doorbell 2 lighting up at night

I just have my Ring doorbell in the house testing it out but noticed at night once everyone goes to bed it lights up every 15 minutes and sets my in house cameras off. It’s strange but the Ring doorbell itself doesn’t indicate that it has sensed anything.

What exactly do you mean when you say it “lights up”. Can you describe that in more detail.

Mine does the same thing light up as if you turned the porch light on. Sets off my other cameras but does not indicate on the ring app that anything happened.

Glad to hear I am not the only one. Customer service asked questions but never resolved.

The white light blinks about every 15 minutes at night when no one is in the living room. I’m attaching a screenshot of my wyze camera events. The bright white light spot in the pictures is where the Ring doorbell sits. It’s making my wyze cameras to detect motion during the night. 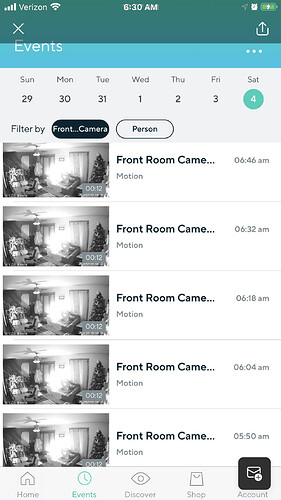 I am surprised no one has provided a solution for this. It is as simple as disabling snapshot capture feature in your Ring app under device settings. This feature seem to capture snapshots on specific intervals to backfill for an event.

My security cameras had the same problem due to this feature.