I installed a Wired Spotlight Camera back in late 2017 and it has worked fine up until recently.

When I installed it, I named it ‘AD Gate’ and set a customized motion zone and refined the notifications so that I only got push notifications to the phone when a person wandered up to our driveway gate and into the motion zone.

I noticed recently that the push notifications were no longer being sent even though the motion events were still being recorded in the Event History.

I checked the Ring app settings and the motion alerts were still switched on.

When I then went to Android Settings and looked at the notification settings for the Ring app, I was suprised to see three instances of motion alerts in the list of alerts that Android was aware of on the phone (screen cap attached). The list of known devices was:

So I unistalled the app and reinstalled the app from the Play Store. When I logged back in, I noticed that there was now only one instance of app notifications in the Google Settings list:

I’m not sure if the reinstall has cured the notification push issue I was experiencing since I need to test it out personally when I get back home however the above seems to indicate that subsequent updates of the Ring app created multiple instances of a phantom Ring device on the Android phone (it is a Pixel 2 XL running Android 10). 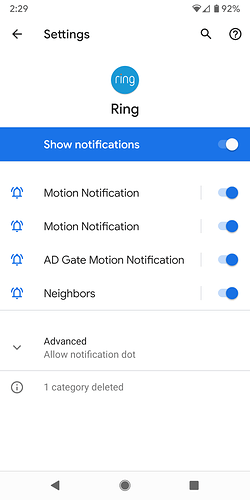 Hey @LosRubios ! Great call on uninstalling and reinstalling the app. We always recommend this as it ensures your app is up to date and integrated optimally with your mobile device/ Android version. Definitely let us know if this alerts concern persists, we are happy to help