Does anyone have "ghostly"orbs that are on their doorbell cams at night? About to drive me crazy setting my motion detector off. 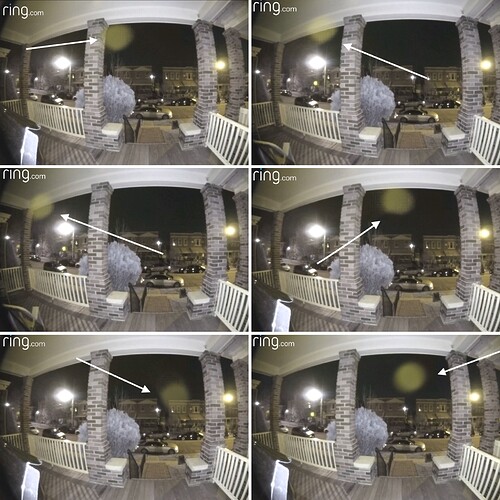 yes! We also have white orbs that set off our ring doorbell ? Very strange.

We have the same exact issue. It started about 3 weeks ago.

That is when mine started. Ring Help just told me to clean the camera, which we have done repeatedly already. Ask us to spray parasite killer around the camera but not on it. We did that tonight and I hope it resolves our problem. This thing has set our ring off at least 50 times in February.

Yes. look at ours

I wasn’t freaking out but… this makes me feel so much better. ??

February 20 was the first time I saw it. Then February 23. It is so odd. There’s just nothing that could be causing it.

I’ve had the doorbell for 7 months and never gotten these until the first one on Feb 23rd and then early this morning. I have my doorbell set for people only at 2.

Here’s one of mine.

I’ve had this happen 3 times in the past week. I’ve had the doorbell pro at this house for over a year, weird!

Yes, had an orb last night

Happened again for us last night. We were sitting in our living room and got the message that motion was detected at the door. I opened the door and nothing there. On video it shows the weird orb.

Yes!!! It started on leap Day, Feb. 29th and every night after that. We saw the orb five times last night! I’ve been reading about leap day and it appears the extra day is to make up the lost time and get the calendar back in sync with the heavens. One of the things Jesus prays is that things would be on earth as they are in heaven.

Yes! We have several videos of the orbs. It appears to have started on leap Day February 29th and every day after that.

We cleaned the camera and sprayed pesticide killer around our camera. No more orbs so FAR!!!

Is there some type of malfunction going on with the ringers? Do the doorbell ringers need to be recalled?

There’s discussion of this issue elsewhere at the board, remains a mystery for the moment.

I noted a static ghost/orb this evening on mine (wired video doorbell). Location is under porch awning adjacent to door, side-lite window, and under a coach lamp. Coach lamp presently sports an LED bulb. Earlier period of constant floating ghosts corresponded to a fluorescent bulb. Blinding the coach lamp - or simply shielding the doorbell - makes the ghost disappear. Cleaning the camera lens did so too (but failed to eliminate the reddish ghost top center). Curious whether others with this experience have an overhead or otherwise obliquely-shining lamp upon the device. Also noted a couple of expired no-see-ums (midges? who knows!) atop the doorbell… wonder if they are the relics of floating ghosts. Lights & bugs remain the principal suspects.