No snapshot capture on brand new stick up cam

I just installed the latest batttery powered stick up camera and subscribed it to a protection plan, and I can find no option to turn on snapshot captures. I called support and they told me it’s not supported on this model. Is this working for anyone or did I get the correct story from support.?

From their page I’ve attached a screenshot about snapshots. It does say all devices. The battery does make it less useful since it will use it. But it should still work. 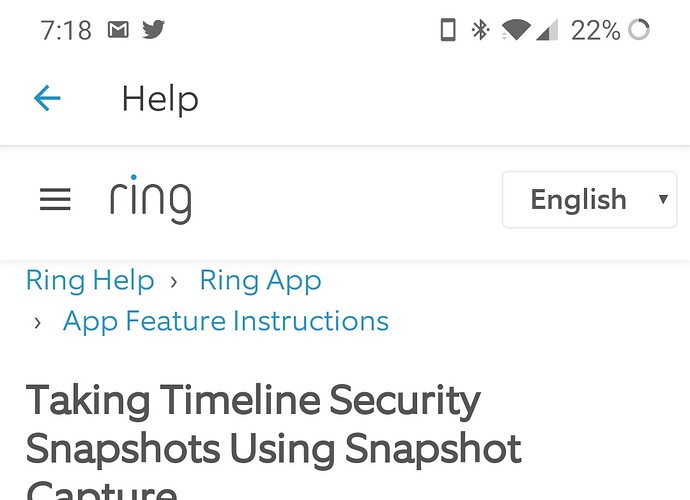 I have the same issue. Installed a ring doorbell 2 and that has it, but no option on the stick up cam?!

My Ring Doorbell 2 purchased in November has the snapshots.

Any response for this issue?

So I’ve managed to get my ring doorbell (1) and my indoor only ring stickup camera to get snapshot by removing from account and reactivating it. (Absolutely mind-numbing that is required to try and force an update… but whatever.)

I’ve tried a couple times on my outdoor stickup cams (gen 3) and no dice. So either they’ve gated this update, or never actually released it yet… but that’s my opinion.

I also just bought a new gen3 stick up cam and it does not have the snapshot feature either. Firmware is “Up to Date” so not sure why it doesn’t appear.

This one FAQ page has this cryptic statement:

Note: This feature is currently available on new device setups. Access to this feature will be available for existing devices soon.

I was also reading some Reddit posts on this and it seems this feature may still be rolling out.

Spoke with Support today. I have Gen 2 & Gen 3 devices, purchased at around the same time. Thought they were the same. Support says this feature is supported on the Gen 2 but NOT Gen 3… go figure… Developers!!! figure it out… shouldn’t be that complicated…

Hey neighbors! The Snapshot feature is available on all devices except the Stick Up Cam 3rd Generation. This information and more can be found in our help center article about Snapshots.

@Marly - Why? Why is the relatively new snapshot feature not available on the newest Stick Up camera? Can we expect the feature soon or should we return Gen 3 and buy an older model or another brand?

I ask myself this everyday… been waiting for months

Our teams are always working to improve and add to features and devices. We always value our neighbor’s feedback and I’ll certainly share this with our teams for reinforced value in this feature. Feel free to also make any feature requests you desire, on our Feature Request board.

So, I have a 10-minute, non-adjustable snapshot feature as of today on my brand new Gen-3 Stick-Up Cam.

No idea what I did made it work or if there was a firmware update, but here were my steps:

Marly from Ring just said on this thread (as did another customer) that Gen-3 doesn’t support snapshot. So they must’ve done something or I REALLY should go play the lottery tonight.

Also, while I did set the camera up on an Android phone, the snapshot is showing up on the iPad I use as a dedicated camera monitor.

As we all probably know by now (and if this works for you), this could all break tomorrow. The devs seem to dig toying with our emotions by giving and taking features from us.

Hi, thanks for this. So you removed the cam and started from scratch? You lose all the recordings that way right?

Hey neighbors! Wanted to clear up some confusion with this feature after speaking with the appropriate team. The Snapshot feature i**s currently available on new device setups, but access to this feature will be available for existing devices and versions soon. We also have a note in our Ring Help Center Article here, which points out that the Stick Up Cam 3rd Gen does not have it at this time, whether the device was newly set up or not, but it is coming this year! You may see one device have it while another does not, and this can be due to the device being a different hardware version than your other. You can verify this with our support team here. **

Just a note, over the past couple weeks, my gen 3 stickups got the feature. Not all at the same time, but eventually all 3 of them got it.

I have 3 new Gen stick up cams. all 3 had snapshot. Now only 1 has snapshot. This is crazy. I also have 1 wired cam telling me I need to charge the battery and the device will remain offline.

I have the same problem with 3 cams my newest doesn’t have snapshot. No mention when you buy a new one and very odd new ones are not supported.

In addition also smart alerts doesn’t work on the new cam while my other cams work fine. Same problem.

Ring, please resolve this asap. Is a critical feature for such an expensive device. Thanks