I’m new to Ring and recently I started integrating the Ring ecosystem into our home this week. So far everything has been great except for one inconvenient flaw: the new video doorbell wired ($59.99) doesn’t seem to be showing up on the Ring-Always Home APP on Windows.

My devices consist of the following and I installed them in this order as well:
Ring Floodlight Cam
Ring Stick Up Cam(Battery)
Ring Video Doorbell Wired
Ring Chime
Ring Spotlight Cam(Battery)

I installed the first 2 cams and the video doorbell+chime on the same day with the Spotlight arriving the following day. All 4 devices setup went flawlessly on the mobile app and everything seems to be working. The only thing is that after I tried installing the Ring-Always Home APP on Windows everything except the video doorbell cam is present on the dashboard/device list. Even the Chime is registered under the device list but not the video doorbell.

The following day my Spotlight Cam arrived and again install/setup was flawless. I didn’t even have to reinstall the Windows APP it automatically showed up under the devices. That makes only 3 out of 4 cams showing up on the Windows APP and 4 out 4 cams showing up on mobile APP. Also before anyone ask, yes all devices are registered under the same address only one location and all of them are connected to a single WiFi access point.

Now the only thing I could think of at the moment given the Ring Video Doorbell Wired ($59.99) seems to be a fairly new and was just recently released on Feb 24, 2021. Could it be that the Ring-Always Home APP on Windows is outdated and hasn’t included this device yet? 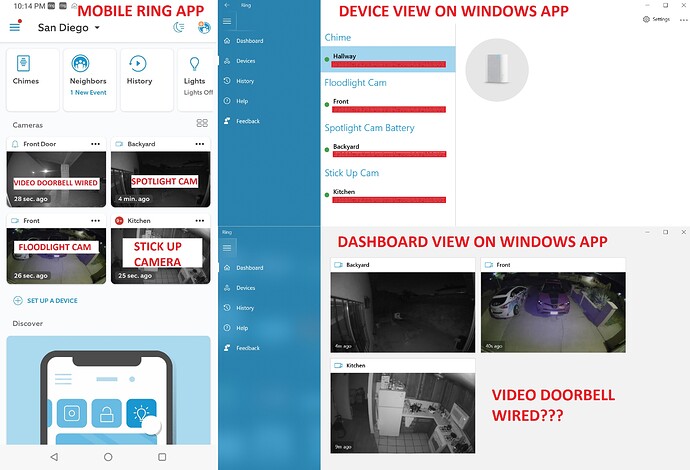 Anyone else who bought the new video doorbell wired experiencing this issue?

Hi @AMGRing. Thank you for sharing your experience with us regarding the Ring Windows app. The reason you are not seeing your new Video Doorbell Wired in the Windows app is because it no longer receives device or feature updates, though they will continue to receive critical security and bug updates. We suggest using Ring.com to view your devices on a desktop computer. The team here is continuously working to add features to improve your Ring.com experience. Thank you for being a great neighbor, please let us know if you have any additional questions

I JUST bought this ring wired and NOW I find out it is no longer supported?

Same here. I actually had an older Ring Doorbell, and “upgraded” to the wired. SMH

Expensive upgrades are simply wonderful. Amazon too busy counting last quarter’s profit to assign a single person to fix this? Now I go to Ring.com, go through 2FA and nowhere can I find a way to view the camera(s) live. What I am missing (except previous features)?

I’ve just got the ring pro 2. I had to replace the pro due to the common issue with the button cracking and eventually breaking off. Now I’ve found out the windows dekstop app no longer supports the new device i’ve purchased! Had I of known this before purchasing I would of looked at alternative options. I rely on the windows app for notifications and view the camera instantly since i’m working at my PC all day, its been very handy to quickly open this, especially when on conference calls.

@Caitlyn_Ring has development stopped completely? Are there any plans to add support to the windows app for newer devices? Have amazon thought about all the people now working from home in front of their PC’s and MAC’s daily where this would be very useful to them? The amount of home workers has increased significantly and will remain for alot of people even when Covid restrictions are fully lifted.

If the only way is to access via ring.com from PC’s then are their any plans to add web push notifications? Also as tracemac stated, its not possible to goto Live view from ring.com?

Hi @cpmilez. Happy to chime in here. The Desktop version of the Ring app will no longer receive devices updates. Any future updates on this will be posted here in the Community.

Thats a terrible answer. No live view on a brand new camera is ridiculous. Spend the 5 minutes and update the app.

Wow, ssad that these new cameras wont come out on widows ring app. I think i won’t purchase anymore. Super convenient to see them on PC but not always on phone, esp from work.

I just installed a Floodlight cam for my mom, and she relies on the Windows Store app to get live video from her doorbell. We relied on the fact that there was no notice that the Windows Store app was end-of-lifed. Is there another way to get live video on the computer (she does not have a mobile phone or tablet capable of running Ring), or should we both cancel our Ring Protect subscriptions, send the floodlight cam back, and find another vendor that actually supports their internet connected products on the most widely used computer platform?

I find this to be an unacceptable solution because your app page on the Windows Store says “All Ring Video Doorbells and Security Cameras stream live HD video and two-way audio straight to your Windows 10 device.” When will you fix this so that my mother’s new flood light will be made available on the app? 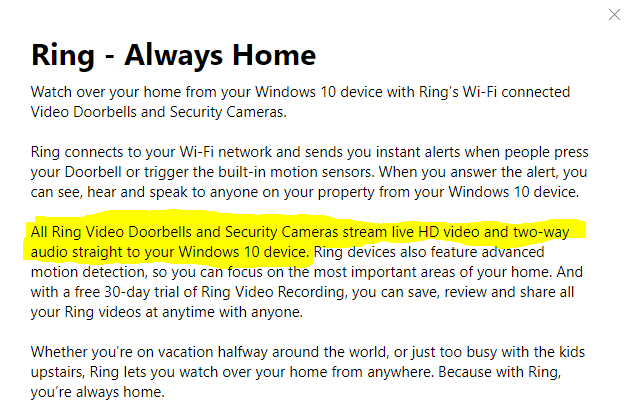 I also purchased the wired bell push with the intention of watching on my PC, AS ADVERTISED, please fix. The alternative is a lot of returned devices.