I just want to share my recent experience (August, 2019) installing and troubleshooting my install of the Ring Video Doorbell 2 with the Ring transformer.

Yes, the “big pipe” generally always feeds into the “smaller pipe” in electricity. This is why the adapter is really only made for the Pro (out of the box, anyway) and isn’t meant to attach to other wiring but be run directly from the outlet to the device. So your case made things unique. Maybe they’ll offer more plug-in transformers with integrated resistors for the Ring 1 & 2 to eliminate all this hassle in the future.

Now, moving forward keep in mind the resistors can still get quite warm-hot to the touch (smoke is not normal, though), as they’re not meant to be touched (they are chassis mount resistors for a reason). They can, under certain conditions, be absorbing up to 50W of power that they’d have to dissipate as heat. Now, a RDB with a 24VAC transformer isn’t likely to get it anywhere close to that 50W rating (probably closer to 12-20W max at 24VAC), but it’s rated that for a reason. Think of how much heat a 40W incandescent light bulb gives off. It’s like that, but in a smaller package. So some heat is normal, as it’s replacing the load the chime would have.

And my last comment on this is that I’m glad you returned that junk one off Amazon. Those cheap plug-in transformers that all say they’re for Ring/Ring2/Ring Pro are all junk and a con. Getting the official one is the way to go, and while your installation with no chime and a plug-in transformer is somewhat unsupported and not really documented (since this scenario is usually done with a standard hard-wired AC transformer), hopefully this will help others who may try this in the future. But not continuing to use those cheap 3rd party transformers was a great move. Amazon should really ban them from advertising as compatible with Ring/2/Pro, really, as they’re useless at best and a hazard at worst.

Looking for a clear statement from Ring in the installation instructions for Ring Video Doorbell Pro regarding the power requirements. What exactly is the ProPower kit? there ard two spa de clips that are some sort of power filtering for the Video? the sticker on the ProPower Kit has accomodation for 2 wires in or out , if you remove the sticker. THe Power requirements for the actual doorbell are even murkier… there is discussion about 16 to 24 VAC (with unspecified watt/Amp rating) and i see lots of scary references to a Big WireWound resister in some usage cases. Is there a single document that I can use avoid frying my Doorbell or burning down my home? documentation is inappropriate.

ly to a transformer:

Just for info… Voltage and VA what’s that? there are a couple of way figures are quoted…

the voltage of the transformer e.g. 16-24V (in this case usually 2 sets of connections allowing you to chose with voltage you want), and a VA number that’s the power the transformer can deliver for the set voltage.

So if you look at the 16VAC (voltage alternating current) transformer Ring sells in the US for its PRO model it’s rated at:

The combination of the Voltage supply out and VA rating are key to getting the Ring doorbells to operate correctly. In the case of the Transformer Ring sells it is rated to handle both the Ring doorbell and a powered chime.

In the UK/EU Ring supplies a Transformer with their PRO model that can also be used for the RVDB1 and 2, that has a highest rating of 24V at 15VA which is sufficient to run the PRO Doorbell. 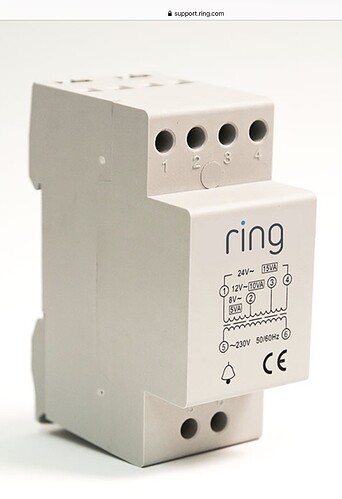 Depending on your desired use, or wiring configuration, you will find that the above articles show how to install the Pro Power Kit and what transformer voltage and amperage rating is recommended. I hope this helps!

I have wired my ring 2 doorbell exactly as MZ with 24 volt transformer and 25 ohm resistor and the lindication on my phone ap shows hardwired and the light around the ring button is continous and the Ring works. However I notice that the battery is discharging at a rate of about 4 percent a day. Will the battery still run out of power in a month and need to be recharged? What is the experience of others.

With the power to the Ring Video Doorbell 2 being hardwire supplied by the transformer/resistor combination, the Status for power under Device Health in the Ring app should always be at or near 100%. Occasionally, my power status will dip as low as 94%, but by the next day, the power status is again up to or near 100%.

I know that if motion is being detected frequently and if videos are being produced frequently, the Ring device will draw down the power more quickly than otherwise. However, the power status should recover as motion and videos are less frequently triggered, as in the nighttime, for example.

Hi, I bought a ring transformer ( dla2420B) and it worked for a few months Now its not producing any voltage? The plug prongs articulate … almost too freely? Has this failed?

Hi @westerj. I would advise to contact our support team for your particular situation. This way, they can go over the voltage history and see if there is a possible trend. Be sure to take pictures of your transformer, Doorbell wiring, and chime kit (if applicable) as they may need this when helping you troubleshoot. Please give our support team a call at one of the numbers available here. We’re taking additional steps to protect our team and help reduce the spread of COVID-19, so this has resulted in longer than normal wait times. If you are outside of the US, please read our response to COVID-19 here to see how to contact support.

Called tech support. Voltage had dropped. Wall wart was said to have overpowered the device. Was advised to acquire a lower power wall wart. The one i was advised to get was the same power?? 24vac, 20W?

Hi @westerj. I would advise to go with what your support agent recommend, as they have they best knowledge or your exact circumstances… If you are unsure, they more than likely sent you a follow up email that will allow you to directly communicate with them.

Ok. Took ring off front door. Put up the “Ring in for repair, please knock sign”.

Ordered transformer from Amazon. Not the same one that failed.

New transformer is in place. Getting 17 VAC. Looks good. Blue annular LED is Lighting from Noon to about 9AM, clockwise… So I guess battery is charging. Will give it an hour.

Clipped wire on DLA2420B and there is no voltage 12" from transformer body. The swing out 120VAC prongs feel like they are not connected … too loose. Can I get that replaced?

Why is there even talk about a resistor? THere is no Hi-Current doorbell to chime… It powers the Camera, logic and Wifi… that should be predictable.