Don’t know if the holes are the same but the power is. If you had a power source working with Pro 1 it should be fine for Pro 2.

Interestingly in the U.K. ring now ships a DC transformer with the Pro 2 vs the old AC with the Pro 1. Both can use 24v AC or DC.

Just did this yesterday.

The screw holes on the doorbell match perfectly so changing the actual doorbell was simple (other than having to search around for the right screwdriver for the security screw).

One thing to call out is that the Pro 2 is just a tiny bit wider. My Pro barely fit in the space and I was concerned when I started putting up the Pro 2 that it wasn’t going to fit. Getting the cover on took some effort (thankfully it was butting up against some aluminum that has some give) and the screen door just barely clears the other side. Definitely a concern that a slight shift over time could end up with the screen door whacking into the Ring. Calling this out as you may have issues if your Pro just has barely enough space as it is.

Unfortunately, the Power Kit is completely different and Ring insists that you must use the new one, so there is some work to do on that side of things. The new kit is very simple with just two terminals that you put under the same screws that attach the normal doorbell wiring to the chime. The harder part was reversing the more complicated wiring required by the original Pro’s kit (though that was just a matter of carefully tracing the wiring back from the grey/orange clips from the original Pro’s kit back to chime). Much cleaner installation than the original once done and doesn’t take up nearly as much room.

For whatever reason, the Pro 2 complained a lot about my voltage being too low, even though a voltmeter verified it was getting a good 18V. It has since normalized, but it seems like the new one might have a bit higher electrical demands. To be on the safe side, I will most likely replace the transformer at some point (if I can actually locate it).

Oh, one additional thing. If you have your Pro on a Protect Basic plan, that plan and the associated videos will NOT autotransfer over to the Pro 2. It seems the only thing you can do is go through your Pro video history to download anything you want to save and then cancel that plan and cross your fingers that you get an appropriate refund.

I had thoughts about getting a Pro 2 to replace my current Pro aswell - because i found the night camera on the pro is not very clear - a little blurry and out of focus seems. Looks great in daylight though) 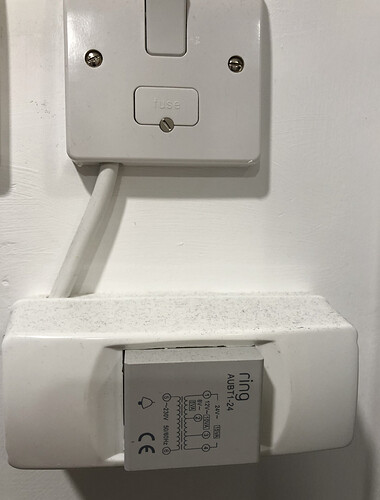 I have this transformer from the pro1 - i assume must pro1 owners also has it.
When you said the power kit is completely different - does that mean i have to change this whole unit aswell? I assume this is the transformer?

Sorry - for the stupid questions - my builder fixed it on and im not sure about the whole wiring.

Are you aslo implying that “just changing” the fromnt door camera - the pro 2 will not work?

That is the transformer and you shouldn’t have to change that as it is 24V. I am referring to a much smaller box that is labeled “Power Kit Pro” that is typically located within the chime box. If you didn’t have a doorbell with a chime box originally, then I don’t know where that might be located.

The Pro 2 comes with a new Power Kit that Ring says those in the US and UK upgrading from the Pro should also install the new Power Kit. It is a very easy replacement and not nearly as complicated as replacing the transformer.

Actually, I just noticed over here that they only mention the US and Canada as needing the new Pro Power Kit, so maybe it is as simple as just replacing the doorbell for you.

I see! I don’t have a chimebell install as I use the ring chime. So for me it’s merely a straight swap of the doorbell pro1 to 2…

Please let me know if the quality of the picture has vastly improved or not over the Pro1 - I have heard that the firmware is not too good and contains some bugs.

The only reason I want to change is because I find the night vision picture of pro 1 is very blurry for me. Out of focus. Hasvv Co it improved slot on pro 2 to warrant a change for £250???

I saw those complaints, but it has been great for me.

Here are some screenshots from the Ring Pro on top and the Ring Pro 2 on the bottom from a section of my front yard. Both were captured from downloaded videos (so they should be full quality). My grass turns brown in the winter so disregard the color differences there (and, of course, time of day, weather, etc. have an impact on coloring as well). 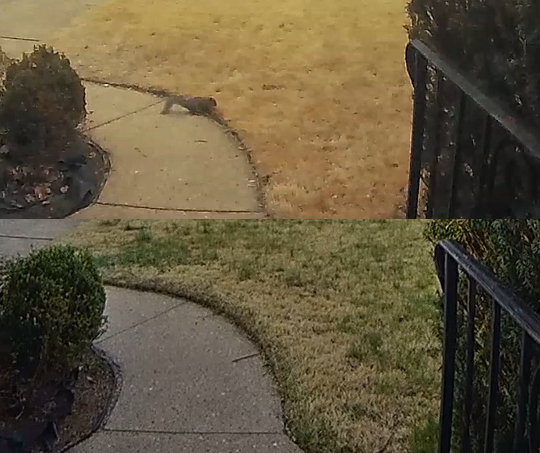 Note how with the Pro 2 you can start seeing the texture of the grass, bushes, and railing and the pebbles in the pavement. It isn’t quite at the level of picking license plates off of cars driving by, but it is significantly better.

I don’t have convenient captures of the night vision, but that likewise has the improved detail but also handles lighting sources at night much better in terms of not having large amounts of glare around them.

In terms of stability, motion detection, speed of live view startup, etc., the Pro 2 has been superior to the Pro in every way.

One strange thing that I noticed was that it took a day or so to settle down after I swapped it in. Like I mentioned in my earlier post, it seemed to struggle with the voltage it was receiving and the video looked terrible as well as quite a few other issues such as a couple of crashes where it stopped responding and I had to cycle power to get it working again. I was about to remove it and return it, but the next day it was great and has been great since. I’m mentioning this because my review would’ve been very negative that day, but I’ve had no problems since. I couldn’t be happier with the upgrade.