Even with a three layer thick a piece of painters tape over it, it is still too bright. This shouldn’t be a hard change.

Please, please, please allow us to disable. I just hooked ours up last night and that thing is ridiculous. Thanks.

Just got my alarm yesterday and… yup, you guessed it, I am here and can not believe the intensity of the GREEN LED.

I just installed the Ring alarm system with the keypad in the bedroom (prior to seeing this forum) and I agree the battery status light is like having a green strobe light in the bedroom - very distracting at night while trying to watch TV or sleep. I would prefer to be distracting when there is a battery issue - not have this be normal operation (manage the exception).

Does Ring even look at these messages? The chain of this message has been going for 7 months and no comments from Ring

No they don’t it’s a community forum. The only way to get it addressed is to raise a support case referencing it.

Yup, this light is pretty bright and difficult to sleep with.

All the lights should be much dimmer. We’re probably going to put it in another room. By far my biggest complaint about the system so far. (Just installed it tonight).

I hope I am not missing something in the thread here or just being too obvious but the lights do seem to get very dim when the keypad is not plugged into the power supply. Okay, they’re not really dim, they’re off. They light back up if you touch a button. You can just plug the power supply into a timed outlet (smart plug or old fashioned timer) so that it only charges during the day and you rely on battery power at night. What do you think?

Also, buttons light up if the keypad detects motion (your hand gets close) when power save mode is off.

Installed control panel in bedroom yesterday, will put tape over green light today! Come on Ring, let’s get a fix for the battery light!

Seven months of continual complaints about the bright green battery light hasn’t resulted in a fix, so surely adding my complaint to the stack will be helpful so here it is. Mine is covered with tape also and yes it looks stupid. It was so bright that it could serve dual purpose as a tanning bed if it weren’t for the alien green ____ tone issue. I planned on adding additional keypads but that’s no longer being considered; in fact, I stopped adding to my two systems I’ve started thinking I may need to cut my losses and consider other systems with more camera options and better support. My neighbors incident map is centered on an address I’ve never heard of and Ring cannot find a solution for that either. Oh, and the alarm licensing people at Ring insist that a city in which I don’t live requires me to obtain a permit. Sigh. Seriously guys, at what point are y’all going to be embarrassed enough to consider some restructuring of your engineering support division?
P.S. I was not allowed to say “alien green ____ tone” because it is considered profanity. I’m not kidding. I attached a screen shot to prove it. I hope no one is offended, LOL! 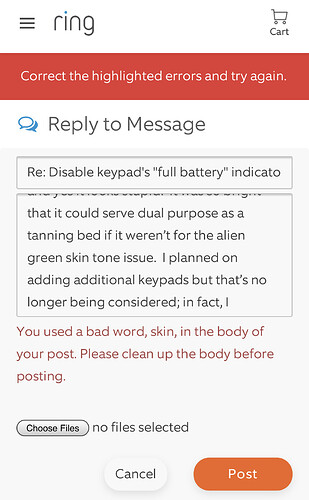 Just installed Ring. I agree with everyone here, the green battery indicator light is INSANELY bright. It’s almost a deal-breaker for us. Is there any direct line to customer service that will allow us to complain in person, in case they are ignoring the community chat?

I hate to break the bad news to y’all, but I think we’ve all been “had.” I’ve been “sort of communicating“ with a Ring Alarm Neighbor Advocate that identifies as “Heather K.” but I really don’t believe this person exists. The same rhetoric that is here shows up in emails to me explaining their deep concern and promise that a fix is on its way. Mind you, dimming this LED has now baffled Ring’s engineers for 7 months…but rest assured they are diligently working on a solution. I’m pretty sure no one at Ring is reading these posts at all. After a quick deflection of the issue by Ring upon first posting, the rest of the complaints go into some cone of silence. But that’s just the start… here’s some more frustration for you too look forward to… wrong addresses show up on the “incidents map” in the Ring app and they can’t fix it. Ring’s Alarm license team doesn’t really know if you need an alarm permit or not (be sure to double check with your local government because I was told to obtain a permit from a city I don’t even live in). The automated system that responds to an alarm activation has my name wrong. Something is wrong in Denmark, folks. It’s not business as usual at Ring.

I just spoke with Cammy at Ring support. She confirmed that this request has been forwarded to the Ring developers many times, but that the developers have determined that the battery LED cannot be disabled due to design limitations of the keypad. In other words, it’s going to take a hardware change, not just a firmware and app update. Cammy at Ring said the only way to turn off the battery LED would be to unplug the keypad and let it run on battery, but doing so would also turn off the alarm status LEDs (Away/Home/Disarmed).

So, I just put tape over the battery status light since I don’t want to give up having the alarm status LEDs constantly illuminated (but dimmed). So that the tape doesn’t look so stupid, I plan on picking up some white electrical tape to hide the darker tape (silver aluminum HVAC tape) that I’m using to obscure the green light. 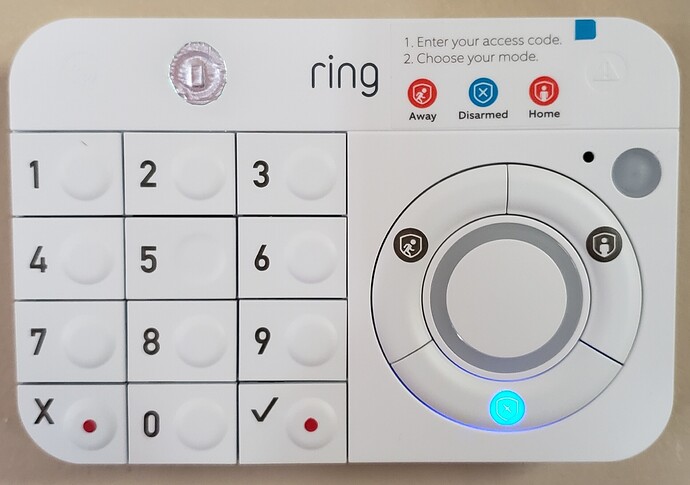 Thanks for posting this. I had a feeling it was going to be a hardware issue. I know they sell sheets with cutouts made to cover all the lights we have today on almost every device. I think I saw them on Amazon. Different colors and of course black and white. It’s become so bad someone now sells stickers…

Since its USB powered it seems the final option is to add an IOT controlled smart plug with switchable USB port that can be used to set a charging schedule so it only charges at convienient times. This way the light would be off when its not charging.

This may do it but sure there are lots of other options. Smart plug

What’s the status of this fix? The green battery light is most annoying.

There is no fix… Tape is all that works. Ring stated it’s working as intended.