I’ve bought and installed a chime pro to extend the wifi and support the ring doorbell, which seemed to have worked really well for a few months, but now is very temperamental. I’ve come to the conclusion that the wifi is the issue, as the device says ‘poor connection’. I’ve set up the chime pro in as suggested an equal distance from wifi router and doorbell, but I’m still having issues.
It seems the chime pro has perfect wifi, but doorbell is still displaying ‘poor’ signal. See attached photos. Any ideas on what I need to do or try next. If this chime pro fails to support my doorbell and extend the wifi then they’re basically both obsolete! 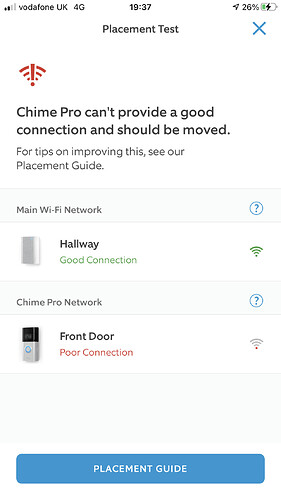