I have had lights for about 6 months. I feel like I have a defective solar pathlight, all my lights are 100% charged/remained this way for awhile (have 11 in total). One light couldnt hold a charge and even died fairly quickly after charging in outlet and placing back outside.

I thought the battery was the cause, bought a new battery/panasonic one, but its been two weeks and its 46%. Then thought it was the location although was fine in winter (currently some part of the day in shade when there is sun). I decided to try and swap locations to a full sun/unobstructed location of another pathlight. Its odd that all my other lights are fine and are at 100% (and even the pathlight that swapped to part day shade location remains at 100%).

The light setting is 30 sec turn off, only 8pm to 1am light schedule. One notch below full brightness. No motion sensing. Unsure if Im able to get a replacement?

Also almost all lights the top is separating but the lights seem to be still holding charge fine. 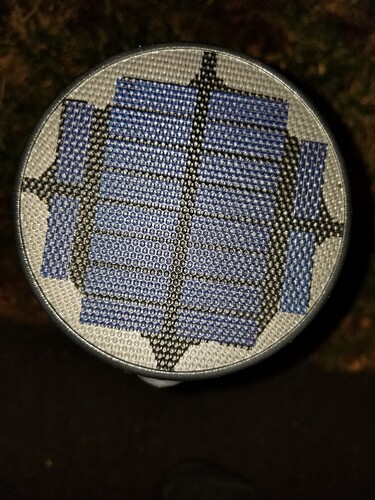 Hi there, @KnicksCM! This concern looks to match this Community thread about the Solar Pathlight. Thank you for the image example.

Our support team will be able to assist further with this. Please give our support team a call at one of the numbers available here. We’re taking additional steps to protect our team and help reduce the spread of COVID-19, so this has resulted in longer than normal wait times. If you are outside of the US, please read our response to COVID-19 here to see how to contact support.

To update, after further testing.

It appears it was not the ring battery (although has 2019 date on it and purchased about oct 2020). I tested this ring battery (that I thought was reason for not holding charge) in another pathlight, (which I partially charged battery via outlet). When placed it was 45% which from 7am to 2pm went to 55%. From 2 to 5pm up to 60%

Another pathlight that I swapped to location that has some shade for a part of the day went from 97% to 100% and remained.

The pathlight that seems to be faulty (with panasonic battery that was moved from shade in area part of the day to unobstructed area went from 45% to 43% to 45% then from about 2 to 5pm 49%. With this testing it seems its the solar panels that are faulty for this particular pathlight (as the ring battery charged in a different pathlight housing, did not deplete even being in partial shade, and the location swap for pathlight to full sun/unobstructed area did not charge as it should especially on sunny day as today).

I plan to call when I get the chance this week with info and request replacement.

Curious why the separation/lift of top happens on the top of pathlights as shown in picture,as someone else also put in a different thread but with no update.

Hi @KnicksCM. Thank you for this update. The research and troubleshooting you did was great and I’m happy to share this information with my team. Feel free to let the Community know how support was able to help!

I’m having nearly the exact same problems, which started almost exactly 6 months after purchase. I live in the south with plenty of sun year-round, and, the issue started in the Summer to begin with. This is clearly a QUALITY issue, not something to do with placement, and there’s no amount of troubleshooting you can do to fix it. I love how it said that we can “take them in for a quick charge” which is in no way quick or easy when you have 18 of them to disassemble, plug in, reassemble… whatever. Also, charging is a temporary fix - when a light (now about 8 out of 18) decides that it no longer works anymore, charging it only fixes it for a day. It just dies again within the week. Lights don’t work for 6 months straight and then start dying within a week after a full charge. No, that doesn’t happen with non-defective products and clearly, Ring didn’t think this one through. Too bad, I really like them for the 6 months that they worked but I’m afraid these are going to be trash very soon now. The only thing Ring ever did was make my wife extra paranoid over every little thing, anyway.

Hi @geofflamb. I’d recommend contacting our support team about your devices since you’re having these concerns are about 8 of them. You can give our support team a call at one of the numbers available here so they can take a look and help troubleshoot this more in-depth with you. If you are outside of the US, please visit here to see how to contact support.

Similar issues with mine, I’ve lost three solar pathlights this year alone and two in the past two months. They aren’t holding a charge even when usb connected. As soon as I place them back outside they are offline again within an hour. I hope ring offers a new battery set in their own store or some kind of fix for these. Otherwise I’m sticking to the regular non solar pathlights and just changing the D Cell batteries myself at least when they go offline it’s not permanently. It definitely seems like a manufacturing issue. It’s a shame that I’ll have three solar pathlights that cost over a hundred dollars that are useless now. While the battery powered pathlights are still going strong. Maybe Ring can allow us to exchange the non functional lights for a discount on other pathlights.