I am thinking about the Ring Intercom and wondered if anyone has CAME Entrotec devices working. Specifically wired with CAT5/CAT6/CW1308. I think the CAME BPT AGT A200K has a similar wiring setup? Wiring attached. Thanks in advance! 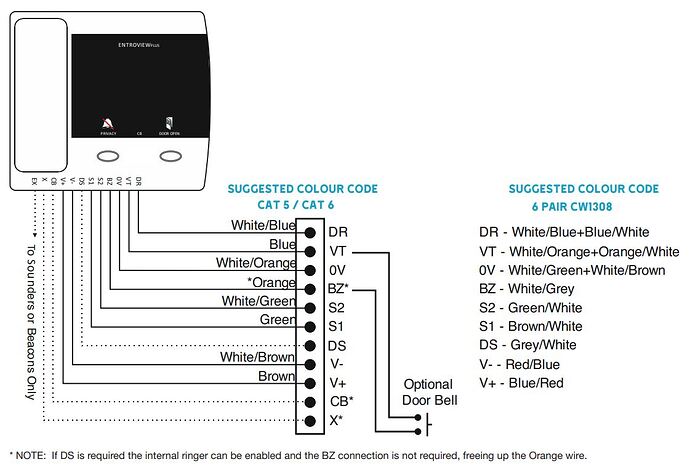 The AGT A200K handset is for use with a BPT (now owned by Came) System 200, which is a 4-wire analogue system. The terminals for an AGT A200K are as follows:

You’d wire these as follows to the Ring Intercom:

I’m really not sure how you would wire the Ring Intercom to your handset, as your handset doesn’t look like it is compatible with the AGT A200K.

There are a couple of cables unused in the A-harness with the A200K handset, maybe they could be used to support your handset. The best place to ask would be Ring Intercom Support

Thank you very much for the response. I think you are right the AGT A200K is quite different. I did find another post that looks like my wiring.

Hi there. I thought I’d help out those who are currently trying to get their Ring intercom setup. One of the annoyances for me - was the installation guide not actually telling you what the different wires are. Cable pins A1 - Power to Ground A2 - Audio/Ringer Input A3 - Audio Output - Microphone A4 - See note below A5 - Open Door A6 - Ringer, Activator, Button pushed A4 → I haven’t been able to confirm this. But it seems to be for systems where the ringing and earpiece of disconnected.…

I have just emailed support as well.

Unfortunately the Ring Intercom compatability list is very limited, so it’s likely you will have issues when dealing with support (based on Twitter interactions I’ve observed).

For instance, if you’ve got a video handset, then it’s automatically not going to be compatible as far as Ring Support are concerned, even though several video handsets have been shown to work perfectly (the video and audio being handled separately). The BPT System 200 AGATA video handsets being one such example of this.

None of the BPT AGT A200 variant handsets are explicitly listed under Came BPT (there’s a bunch of manufacturer model numbers that nobody is likely to know, and an “AGT A” entry which may be a catch-all) so you end up using the AS C/200 model which is a compatible predecessor of the A200K.

The model list under Came BPT is actually a bit of a mess and badly needs curating, hopefully it will be cleaned up in future but probably not

Won’t be holding my breath for any useful response then.

It would make it much easier if they explained what each connection was for people that want to make “unsupported” devices work.

I was able to get mine working this morning using the post I mentioned above. I will post my wiring config soon to hopefully help others.

Hi guys. I have Entrotec rh3+/ed4
My ring in theory is working. The trouble is that for my system to be fully operational I need to lift the phone handle of the hook, otherwise I can’t open the door. Any ideas on how to modify my existing handset? I attached a picture, the cradle switch is the issue (SW1, sw2). Please let me know if there is any way around that or what handset I could replace mine with to make it work.
Thanks 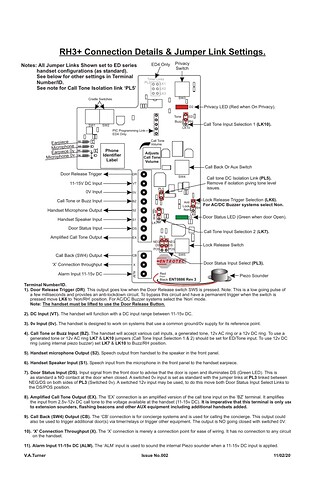 I am thinking of getting one for my grandparents who really need the help one of these would bring.

Since you’ve managed to get it working, could I ask if it would be possible for you to share the wiring diagram- it would be so helpful and appreciated.

Hi! I have set the Intercom Type as Analogue FDX and wired my handset as follows:

I used Entrotec’s manuals as a guidance:

In general it works - I am getting notifications etc. I can open the door but someone needs to buzz first.

The only problem I face is that as soon as I answer the call it gets disconnected in a second or so - so I am unable to talk.
Maybe someone has solution to this issue?