You would think having a routine as simple as: “Alexa, what was that” that we could achieve some simple things.

I am able to achieve all those, except step 4, as it shows in the routine to add it as UNSUPPORTED device.

Forget about Ring + Echo/Alexa = Amazon, and forget about having the smartphones receive notifications that someone is at the door by either motion or by pressing the doorbell, that works. Forget about saying: Alexa, show me the front door, and it does… all that works.

But a simple ADD TO ROUTINE is not supported? I have to assume that if I were to order an outdoor RING camera, it can’t be added to a routine either, so I will have to cancel my order for such, as I already have cameras recording the outside that are not supported with the Echo product. 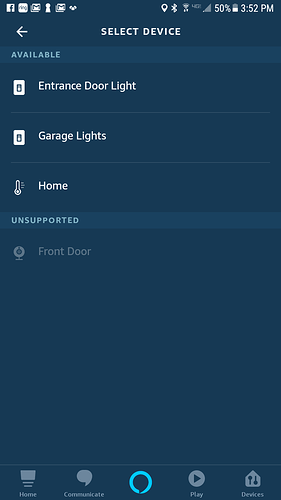 You can try a third party app called Simple Command. It’s like IFFT but works better with Ring.

I agree. This is actually the MOST IMPORTANT feature for me (integration with Alexa routines). If a camera doesn’t have that, I don’t even want it anymore.

Please someone post a brand of camera that lets you trigger Alexa routines, that’s still available to buy (Amazon’s discontinued Amazon Cloud Cam *can*, which I can confirm, if you can manage to find one on eBay or convince Amazon to sell them again).

I’ve noticed that too. When you create a routine, all ring devices say unsupported. ?‍♂️

I just had the same… then found another comment on a random website… Even though I had ring on my Alexa app… I took off the link and re-added it, let it find the device. Once I did that again, then I was able to enable the ring skill in the skills and games bit on the Alexa app and then it let me set up the routines…

one thing I did notice it would not let me choose two of the Alexas I have on the same routine, so I created another separately.

I believe the reason you can’t add the doorbell or camera is because they are the sending device, not something that you turn on or off like a light.
What did you intend it to actually do when you trigger your routine?
Everything else in your example is turn on light - the camera is already on hence it doesn’t show in that section of the routine.

If you want your camera to show on a device then you need to set up the routine to display the feed, which isn’t done by adding the camera itself since it’s not a on/off trigger like your lights are.

So, for instance, I’ve set mine up to auto show on all my visual devices when someone presses my doorbell and then after 3 mins, close again (incase I’m not in so it’s not just transmitting all day).

This wasn’t done by adding the device itself to the output, only the trigger action.

So maybe what you actually want to add the customised command to “Alexa, show front door” from the echo show/tv/whatever device you view it on.

I hope this helps