I have issues with my Ring Chime 2nd gen, that it disconnects after a while and can’t reconnect.

First I thought it was my Arlo bridge WiFi that interfered with my router WiFi since it puts it self on the same channel. But after testing with Arlo turned off it still lost connection.
The chime is very close to the router and after reinstalling it it lies around 40 RSSI but after a while it reports as offline and had 60 RSSI.
I have a router mesh setup, could that be the cause of the issue? That the chime somehow gets interfered since the nodes are on the same channel?

The Ring doorbell I have works flawless, so I really believe that there is an issue with the chime. Also it worked great about the first year of usage. It’s like the last 6 or so months that it has had this issue. Though during that time I’ve switched from Google Wifi to an Asus mesh product. Could it be that Asus and Ring doesn’t like each other?

Does anyone have any idea of what it could be?

Placement and network type can certainly be a factor in Chime Pro connection. I recommend using the 2.4 Ghz connection with the Chime Pro, if you are not already. As you have a robust sounding mesh network with multiple nodes for coverage, it’s worth also considering if you need to use the Chime Pro as an extender.

While wifi will fluctuate in nature, your RSSI should not fluctuate that much unless there is a major appliance or electronics nearby, or if your mesh network is setup to move connected devices to other nodes. Testing different placements of the Chime Pro, or even the mesh nodes, can help with connection.

Feel free to check back to see if other neighbors with similar networks have chimed in with suggestions.

Thanks a lot for the answer. I’ll have some testing to do.

It could have something to do with node switching or which frequency band it is on. I’ll check if it is possible to lock the device to a specific node and restrict it to 2.4 GHz. I didn’t think the Chime could connect through 5 GHz.

I don’t have the Pro so there is no extender on it. Also, it worked well from another place in the house where there could be more interference but that was when I used Google WiFi.

I couldn’t see the Ring Chime (2nd gen) in my router, could it be that it connects to the doorbell and not through the WiFi even if the setup and information makes you believe it does?

Anyway, I could not restrict the doorbell to 2.4 GHz frequency but I could lock it to a specific node in my mesh. I also gave it a static IP. So far, about 16 hours, it hasn’t disconnected.

I continue hoping that this solved the issue.

I still have problems with it loosing connection. I can see it in my router and there it is still connected, so why is it that it doesn’t work and that the Ring app says it isn’t connected?

It works for an hour or so after removing it from the socket and putting it back again. It never disconnects from the router, according to the router it is connected.

Is there a defect with the product, software or Wifi chip in the device? It is also strange that it is recognized by the router as a Canon photo printer. 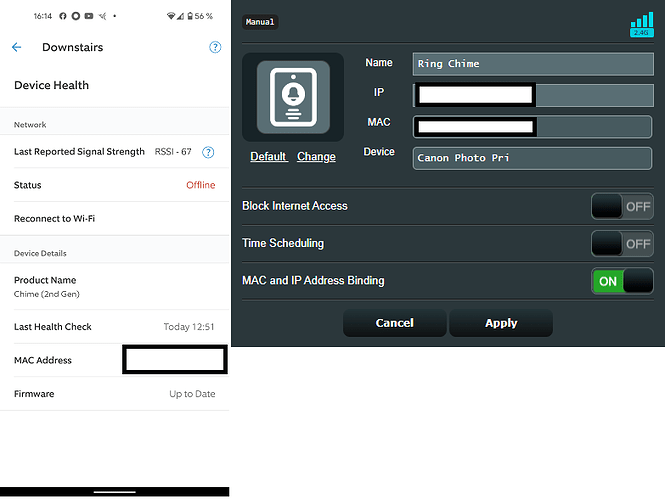