Would love to get the Setting: Ring to Open like Nello had it and Nuki Opener has ist!
It will automatically open the door if you ring. No matter if you are in the Geo zone or not

Just for clarity, when you say “If you ring”, what do you mean? Do you mean the visitor can ring a telephone number (from a telephone/smartphone) and the door will automatically open?

If so, why not just have your visitors install the app and add them as a shared user? Or have them call you on your phone, so you can let them in? Although given the way Ring Intercom works, you’ll be notified when they’re there anyway so it would be unnecessary to have them call you.

Maybe you could rig something up with Homekit or some other proxy to handle the automation, assuming it doesn’t weaker the security of the entire building - imagine an Indian call centre scammer opening your front door…

i’m sure they’ve meant ring the intercom doorbell downstairs instead of calling a phone number. when it comes to security, nuki and other manufacturers have this features for a long time so i’m sure it’s ok. i would welcome geofence feature so it works only when you are home,

yet better being able to set to work only when your Home is in Away state (you are not home but by geofence the app would know you are near), this would prevent auto opening doors for anyone that rings while you are home - this however would require some heavy interconnectedness - maybe for the Matter future, but until then i’m ok with this being the case

so until then: Ring the intercom downstairs (while you are close optional) and doors automatically open

why? keyless entry for you. no hassle of having to take out your phone and opening the app and pressing the button, especially because there is not an apple watch app. at this point it is quicker to just use the key

again, other smart intercoms have this feature, it was a surprise to me that ring does not have this (there was 0 reviews when i was preordering)

Just something else to consider, particularly for Ring - Amazon Auto-Verify will make gaining unverified access to buildings an even more tempting opportunity for certain people that shouldn’t be in the building, in which case with Amazon Auto-Verify building security needs to be stepped UP not DOWN.

Take this example - coincidentally caught on a Ring as they always are these days - a woman inside a building pinching parcels from outside a front door (not my building, thank God). 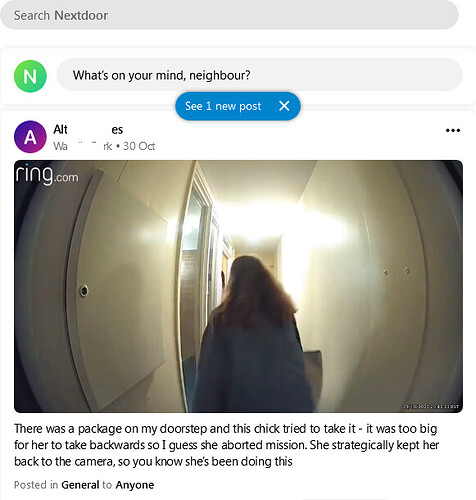 I’m just saying, that providing too many unverified auto-entry convenience solutions which are then multiplied by potentially dozens of flats in the same building each with a Ring Intercom, all using the same convenience features at different times, will become a huge security nightmare for ALL residents.

If buildings are rendered insecure because of people not wanting to use their keys/phones then a genuinely useful feature like Amazon Auto-Verify becomes impossible due to thefts.

I also really need that feature. I cant wait three more weeks. Otherwise I have to return it. I thought such a basic function would be implemented already.
I can’t even just press „open“ or do I miss something?
I just can open the door when someone is ringing.

wtf neilm. if someone wants to get in they have milion options to do so unless there is a security guy present at all times by the entrance. we were talking about geolocation. i’m sorry i don’t care what some “chick” done in some who knows where. and btw it was most probably someone from the building. i would never consider any space outside my door safe to leave stuff in. also if i want to make my building’s door less secure i also have million options to do so, that’s not my goal, i wanted a smart device to make my life easier.

just so we are clear so i know that i can return the Intercom and purchase one of others brands that support this, Ring is not planning adding this feature right? thanks

wtf neilm. if someone wants to get in they have milion options to do so unless there is a security guy present at all times by the entrance. we were talking about geolocation. i’m sorry i don’t care what some “chick” done in some who knows where. and btw it was most probably someone from the building. i would never consider any space outside my door safe to leave stuff in. also if i want to make my building’s door less secure i also have million options to do so, that’s not my goal, i wanted a smart device to make my life easier.

just so we are clear so i know that i can return the Intercom and purchase one of others brands that support this, Ring is not planning adding this feature right? thanks

The problem, if I haven’t made it clear already, is the risk of a multiplicative or compound effect when potentially dozens of Ring Intercom users within a building enable these convenience features to the point where the door pops open pretty much 24x7 if the visitor can find the right button.

And trust me, there ARE people in this world that would be willing to spam an entry panel if there’s the slightest chance of the door automatically popping open thanks to a Ring Intercom - at the very least it will become a nuisance for everyone. It’s going to be Knock Down Ginger every week. On an entire building.

Try and look at the bigger picture, which is that it’s not just about you.

There wouldn’t be a problem if you could ensure that ONLY YOU would have geo-location enabled in your building (or timed-unlocking or whatever unverified unlock feature anyone can think of), but when a lot of flats in a single building enable such features then hopefully you can see that a problem may start to arise.

And that’s the risk, because it now impacts not just yourself but also your neighbours who are powerless to stop their other neighbours from being selfish or inconsiderate dicks.

If your building management is fine with it, then great have them ask Ring to enable it for your building but mine wouldn’t be as we’re having to think of ALL tenants and not just the ones that want some extra convenience in their life.

The thing is, which is good, is that few people have heard of the “other brands” that support this kind of unverified entry, which is why it’s less of a risk/issue but this Ring Intercom product could be huge for Ring, and that’s a very big difference.

PS. Yeah the use of “chick” is a bit weird, it’s from a local UK neighbourhood forum. Unlikely to be someone from the building as (from my experience) residents tend to recognise each other and apparently nobody has recognised this individual. But why reduce building security just to make your life that tiny little bit easier if it then becomes a problem for everyone else who then can’t have nice things (delivered)? That seems pretty selfish to me.

Ohh Yes Ring to open is the best feature, i need that promptly on Ring Intercom!

Hey neighbors! As a reminder, please keep conversations and discussions polite and make sure to review the Community Guidelines here. We appreciate a healthy discussion between neighbors, but understand things may get heated with differences of opinion, so feel free to take a step back if needed.

Additionally, I’d like to clarify that the Feature Request board is what we utilize to gather and share feedback with our teams here. We do not comment on every request added, as we receive a large volume of requests each day. Whenever we have relevant information or updates to share on a specific idea, we will share that information in the appropriate threads. Thank you!

Yes, thank you for mentioning this! I just switched from Nuki (out of curiosity) and was shocked that this feature doesn’t exist!

Ring to open is such a basic and useful feature to have.

Can somebody from Ring clarify if it will be added? Right now, the intercom doesn’t seem too smart - the only feature is distant unlock. As far as I can tell, I can’t even grant access to guests without sharing admin rights?!

I also desperately need this feature. Ring, please listen to us. We can have something like, ring 3 times to open the door or 5 times or whatsoever. I am afraid I will have to abandon ring if this feature isn’t made available in the near future!!