My retrofit alarm kit arrived yesterday. I was surprised that the only power option is battery - am I missing something? Since this is going to installed right next to the existing alarm cabinet, there is obviously power available. Is there not an option to tie the retrofit into the existing power?

Yeah, I thought the same thing when I ordered the kit. I’ll bet it’ll be a future upgrade. POE would be a nice option.

Bumping this 2 year old thread because I just installed this and thought the same thing…
What the heck Ring - the wired panel already has AC power + Backup battery. Why not utilize that. Should be so simple. Now I have to deal with replacing the 2 batteries whenever they die.

How long do those batteries last and what type are they? CR???

Hi there, neighbors! As described in the technical specifications for the Alarm Retrofit Kit on Ring.com, the method of power is via 2 X 3V Lithium 123 Batteries ( Included). @JetRocket11, as you asked about the battery use life, these should last 5 years with 100 events per day. “Events” defined as either open/close events or the 70 minute supervisory message sent from the device to the Base Station to report that the device is online.

My batteries on the retrofit lasted 6 months, . I am pretty sure I have less than 1000 events per day to justify such a consumption. 1/ Is there a way to easily quantify the number of events? 2/ Any plans for an external power supply to the retrofit while keeping the battery as a backup?

After I converted my wired alarm system to Ring, I’ve been powering my (2) Retrofit Kits from (2) 12vdc to 3vdc converters that I got on Amazon. Each converts my old alarm system’s 12vdc red/black wires to 3vdc wires that I’ve connected to the Retrofit battery terminals. I’ve removed the lithium 123 batteries. The converter supplies up to 3A which is more than the (2) batteries which supplied .5A each. Be sure to turn off the old alarm’s power while doing the wiring. Connect with the right polarity (+ to + and - to -). Route the wires through the bottom where the sensor wires enter. After powering up the old alarm, test the Retrofit communication (get green light) and close the lid.

Was it just one 3v supply per retrofit module? I ask because the batteries are 3v each — I guess they are wired in parallel?

I just tested … the batteries are in parallel. So if you decide to hardwire the power, you can tie into the connectors for just one battery (and pull both out of the unit).

let me tell you, mine didnt last not even 3 months. 5 years seems like stretching it too much considering on shelf battery life is less than that

I have 5 motion sensors that were attached to one of the retrofit kits. These send open/close signals every time someone moves in a location where the motion sensors are located. This equals about 10,000 events per day in rooms with lots of activity, which blew through the CR123 batteries in 2 months.

@ths thanks very much for the information about the 12v to 3v step down converter. I was originally going to buy a 120v AC transformer to convert to the 3v DC but I really like the solution of the DC step down because I already have a 12v trickle charger attached to a 12v battery backup in my structured wire cabinet where I put the retrofit kits. I have two retrofits as well. The 12v power in my setup is needed to power my hardwired motion sensors.

The solution to replacing the batteries was really easy. Purchased this:
https://www.amazon.com/gp/product/B07PNWPLRY/ref=ppx_yo_dt_b_asin_title_o03_s00?ie=UTF8&psc=1

for less than the cost of one CR123 battery. Wired the red/black wires to my 12v battery. Wired the red/yellow wires to both retrofits. The power only has to go to one set of battery terminals as they are in parallel. The connection to the negative side was no problem because the spring on that side sticks out a lot. The positive battery terminal I connected by pulling on the spring on that side, stuck the wire under and release the spring back down, which held it in place. Route the wires out the bottom of the cover with the other wires, and you are good to go.

After I powered everything back up, I had to pull the cover back off and on to clear the tamper notice for the device in the app.

NOTE TO @Marley_Ring and/or Ring: I knew these retrofit kits were powered by batteries when I bought them and had planned on hard wiring the power to them at some point. Didn’t think it would have to be this soon. You should redesign the retrofit alarm kits with a 12v DC power input on them as an alternative or supplement to the batteries. All alarm systems I know of that one would be retro-fitting have a 12v power source already installed so it seems kind of dumb to not include this as an option. Thanks.

My battery last only 3 months

Hi, where didnyou connect it to get power feed?

Where does the power come from for the converter? I would like to eliminate the batteries also.

Hi @Southern-Chef, really sorry for the delayed response to your question. I don’t log on here much and never received a notification of your comment. I pasted a picture in post below of my setup.

One way you could power it is by using a 120v A/C to 3v DC converter. Most of these are going to have a EIA-J type connector on them. In order to connect this to the retrofit battery leads you would need cut off the EIA-J tip and then strip the shielding off the two wires that were connected to expose some bare wire. You could then push those exposed ends into the spring leads on retrofit. Make sure you know which wire is positive and which is negative so you don’t put them in reverse. Keep in mind if you do this option your alarm would have no power in a power outage.

Another option, which I did, is to use a DC power step down converter. I used a 12v to 3v step down. The one from my original link I posted above is no longer in stock. I pasted another option for the step down in my next post

The benefit of the step down converter is there is a large selection of 12v batteries that are rechargeable to use as the input power source for it. These 12v batteries are typically used as battery backup in traditional (non Ring) alarm systems. The beauty of this setup for me is that the battery also supplies the 12 volts needed for all my hard wired motion sensors, and backs them up with power in case of power outage. It also powers the retrofit kits through the step down converter. Connect the 12v input leads on stepdown to the battery, and the 3v output leads on stepdown to the retrofit battery terminals. The last thing you would need in this setup is something to charge the 12v battery to keep it charged (an 110 A/C to 12v DC converter charger).

In this setup you would plug trickle charger to an A/C outlet. Attach 12v DC output clips from trickle charger to battery. Attach 12v input wires on the step down converter to 12v battery terminals (where you attached the clips from trickle charger), and then put 3v output wires of step down to retrofit kit battery leads. The power only has to go to one set of battery terminals as they are in parallel. You then no longer need batteries installed in the retro kit because it is getting the power from the wires you connected from the step down converter.

After I powered everything back up, I had to pull the covers back off and on to clear the tamper notice for the retro device in the app.

(see picture of my setup in my other post below).

If you post any links for examples of the things mentioned Ring marks the post as spam as they think I am trying to advertise something. Below are some product codes that are examples of all the things I mention above. I am not endorsing them I am only giving you something to look at as an example.

Just go to Amazon and paste the product code listed into the search box an it will pull them up.

Here is an example of a 3v DC power supply: A3IEBVJBUEN49T

Here is an example of a 12v trickle charger: B07F8WM7WZ

@Southern-Chef, this is a picture of my setup if it helps: 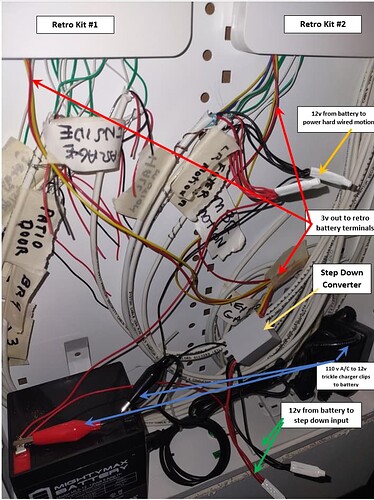 Very helpful, thank you @dabnc. I’ve been looking for a way to eliminate batteries, I think this is the solution.

Do you mind sharing a photo of what’s behind the hood of your Retrofit Kit - specifically of the battery section. I’m admittedly not well versed in this area, and I have an idea of what you might have done, but would love to see an image if it’s not too much trouble.

@dabnc Very helpful. Unfortunately, the 12v - 3V step down device is no longer available on Amazon

Since I have a DSC Legacy alarm and I am planning to use the retrofit kits and connect the door sensors, window sensors, and my motion detectors to the Ring system.and the motions will still need the legacy power source and it has a 12v battery backup I think I can use the 12v to 3v step down if I can find one and attach it to the backup battery above and I won’t need the trickle charger. I also have an extra 12v backup battery (long story) that is brand new so I could run a trickle to this second battery and keep if completely separate form the motions. My main issue is finding a suitable 12v -3 v step down. There are a lot on Amazon that are 121v-5v and I do not want to fry the retrofit kits. I will need two retro kits. I really appreciate DIYers like yourself who share this info.