Recently received a Charging Station with the Ring Intercom.

I’ve left it powered on, without batteries inside. However each time I have gone to install a battery in the Charging Station, it is unresponsive and showing 2 solid white lights (1 light for each battery slot - see below, always the same “stuck on” lights each time). Inserting a battery does absolutely nothing - the battery does not start charging, the lights do not change.

It’s as though the Charging Station has “locked up”, and only after power cycling the Charging Station will it recognise that a battery has been inserted, and begin charging. But of course, sometime after I remove the battery it will “lock up” again (last time I charged was on Friday afternoon, it’s now the following Monday evening, so it has locked up sometime in the previous 2-3 days).

If you’re not paying attention, you may insert an empty battery only to come back hours/days later to find that the empty battery has not charged at all.

Is this normal (I can’t possibly imagine it is), or is this Charging Station defective? 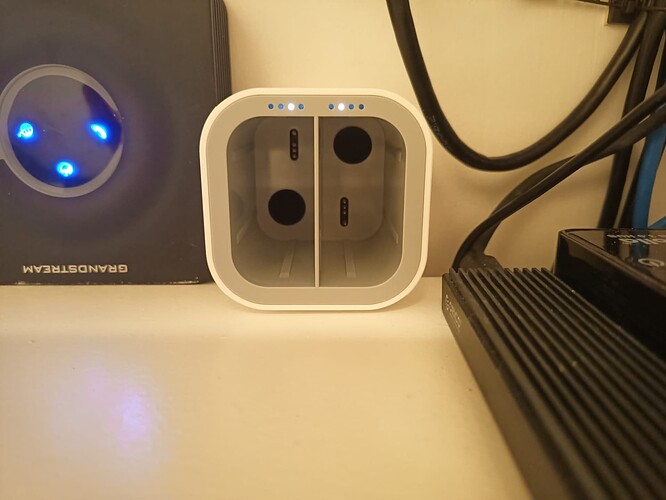 Hi @neilm-uk. This certainly doesn’t sound normal. I would try a few different outlets to see if that will change how to Charging Station behaves. If there is no change, I suggest reaching out to our support team. Please give our support team a call at one of the numbers available here. If you are outside of the US, please visit here to see how to contact support.

I will try a different socket (I’m in the UK) although I’m not hopeful that will make any difference as power shouldn’t be the issue. Will try though, thanks.

I moved it to a different socket - it still locks up, in less than 24 hours (one battery slot) and less than 36 hours for both battery slots.

Here’s a timeline of my testing (note that times are approximate when “lock up” LEDs illuminated, as I wasn’t monitoring it that regularly!). Also apologies for the lighting, my room isn’t really nicotine yellow… I blame my Android camera! 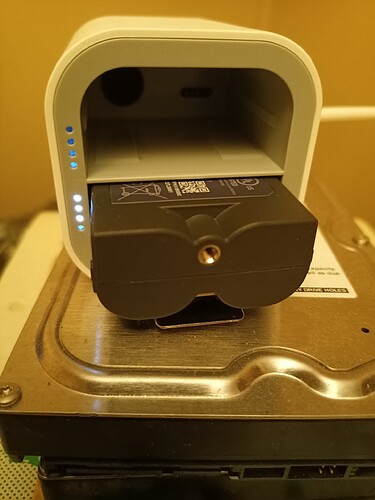 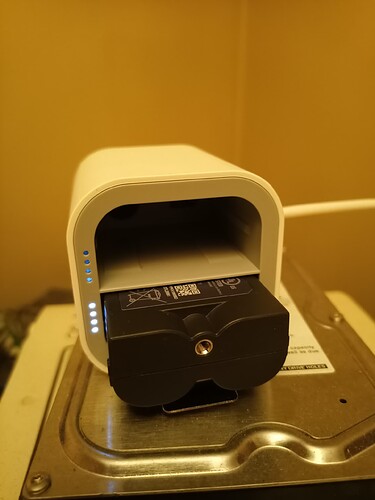 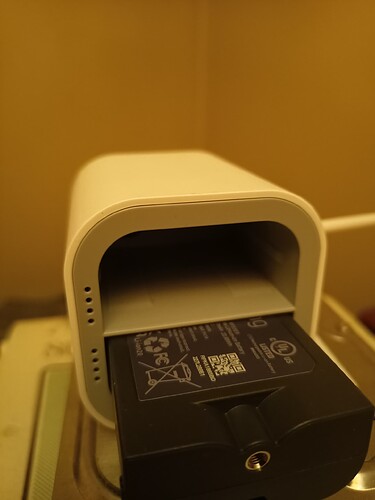 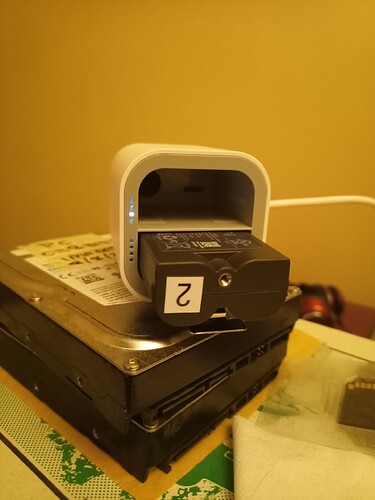 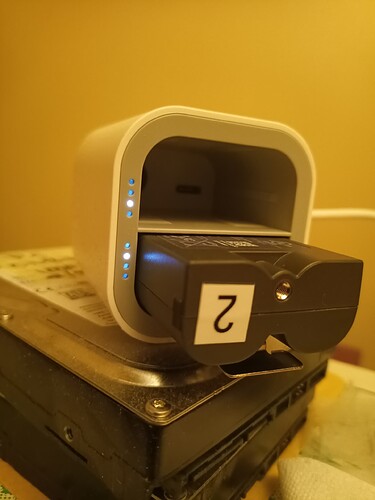 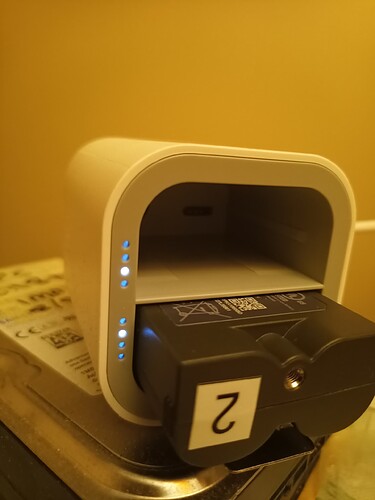 I will contact support for a replacement, but this seems to be a recurring issue - it has been reported here on the forum (OP took a refund) and also on a review on the UK Amazon product page - both original and replacement failed identically.

In all images discussing this issue, they fail in the same way with the same static “stuck on” LED(s) as mine: 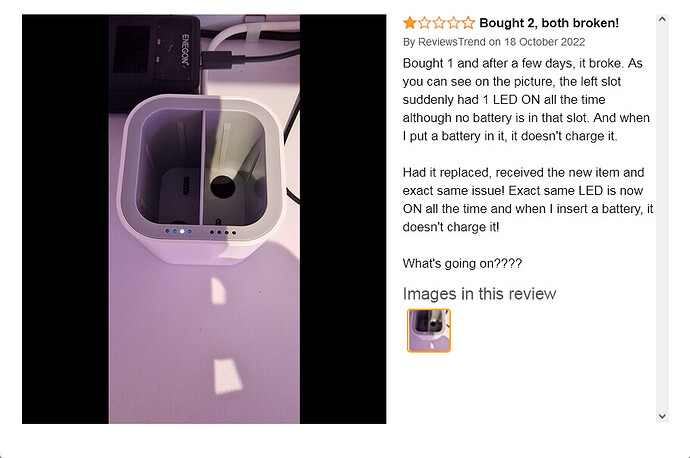 It’s a little worrying that replacements have the same issue - this suggests either a design or manufacturing/QA issue.

Quick update: I used Chat initially, but discovered it isn’t very useful as they can’t diagnose technical issues so I had to call UK support.

I spoke with a lovely guy (Jimmy) who was very polite and helpful, and the Charging Station is going to be replaced (send me a new one, obviously no point sending the defective one back) - it might take a few days, but to be honest there’s no rush.

Let’s hope the replacement doesn’t have the same fault.

Hi @neilm-uk. Great to hear that our support team was able to diagnose and replace this Charging Station!

I could buy another once it’s been refunded, but this uncertainty over the quality of the genuine Ring charging device makes me wary - maybe a third party charger will be a better option.

Hi @neilm-uk. I’m not sure why our support team has chosen this replacement process, but I’m glad that they have your satisfaction in mind.

Yeah, I don’t understand either!

This is the email explaining the refund - it says I should receive an email with the return label in 24/48 hours but it’s been 72 hours already and no sign of the return label (I’ve checked spam folders etc.) so I don’t know if this is a case of the left hand and right hand not knowing what is going on, and that a replacement is still in progress.

I must say the wording in the above email is just weird, with the first letter of literally every word capitalised, and somewhat stilted English. Perhaps it’s been hand-written by a non-native English speaker/writer, but normally these sorts of things would be automated in which case this isn’t what I’d expect from a professional organisation. I checked where it came from, and it doesn’t appear to be a scam…

Anyway, I was told the replacement may take a week or 2 to arrive, which is fair enough, so if neither the replacement or return label has arrived in another 10 days from now then I’ll follow it up…

The first email confirmed that a shipping request had been created, and a replacement is on the way.

The second email (it arrived shortly after the first) was a continuation of the “returns label” email (see previous post) and confirmed that instead of a return/refund, a replacement is now being issued.

I don’t know if anyone from this forum reached out on my behalf but if you did, many thanks!

Hi @neilm-uk. Good to hear. Sometimes the shipping process can be different based on what region you are in.

I’ve plugged it in, but without a battery inserted as that seems to be the trigger that causes the Charger to lockup/crash - I should know in about 24 hours if it’s better than the original.

Pleased to announce that the replacement Charging Station is behaving itself and not crashing, so that’s good news - it has what might be a date of 2022/06 printed on the bottom, while the same code on the first is 2022/04 so maybe there was a run of duff units from the factory for a short period…

Anyway based on my observed charge level there really isn’t any need to have a charging station if your own a Ring Intercom! My charge level has been 89%/88% for the last 2 weeks… which is either weird (or a bug), or an incredibly frugal hardware design by Ring.

Hey @neilm-uk, I’m happy to hear your replacement Charging Station appears to be working without any issue.

Just to report that after a week the replacement has now started showing the same “lock up” problem as the original.

I’m sure Ring sells a lot of these and is aware of the failures, but this seems to be a way too common issue for such a simple device.

I’m not going to waste any more of my time on this, or that of Ring customer service - it is what it is (ie. garbage), but Ring may want to investigate as this ultra simple device has just one function which it is unable to perform reliably.

I’m just going to bin both of mine - in future I’ll use the USB cable to recharge (hopefully only once or twice a year with a Ring Intercom).