Before buying into Ring eco system you may to consider this. Disclaimer: Not written by me

The first mistake to avoid is to buy any product based on features that it does not ship with. Companies make plenty of promises in regards to features, or compatibility that they say will come in a future update, and that they’re working very hard to get to you.

It’s not that they’re lying to swindle you into buying their product. I don’t think these companies have nefarious purposes, but too often they just over-promise and can’t deliver.

The most notable example of this was when Ring, you know, the company that makes smart doorbells, said they would have HomeKit support. 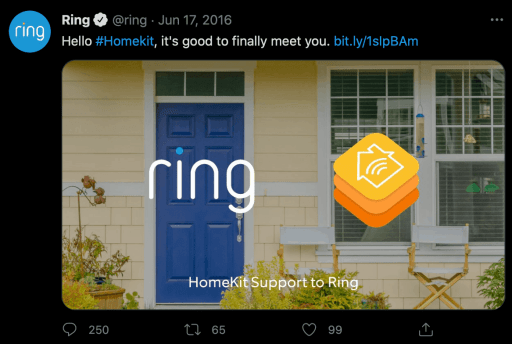 They initially said they would have HomeKit support with iOS 10, back in 2016. It’s been 5 years, and anyone still patiently holding their breath has turned blue and died a long time ago. At this point it’s just a running joke within the smart home community, and serves as a lesson to all future smart home customers.

If a company is says they are working on a feature that is valuable to you, and seems like a really easy thing for them to implement, just wait for them to actually implement it. If it’s just a bonus feature that you don’t care too much about, then that’s your prerogative, but in general, you’re better off waiting, or buying a different product altogether.

Sometimes there may not be any other products, like the Ring example, but at least then you’re not buying something with the false hope of getting a big feature down the line.

And to any product manufacturers out there that may be watching, always UNDER PROMISE and OVER DELIVER. not the other way around.