Agreed this should be a feature not just on the Ring Doorbell but on the Stickup Cams and other motion detecting cams. Also the Ring Rapid app should go straight to Live view when you open app rather than opening app and then having to press the little arrow (or alternatively there should be a widget option that does this)

Can’t believe this is still not available.

I bought the Show 5 as it was deemed required for the Blink XT2 security camera and was bitterly disappointed that motion doesnt trigger the camera on neither the Echo Spot or Echo Show.

90% of the time everyone ignores the ring doorbell and knocks the door or presses the wired bell instead… Even with the ring security sticker at eye level on the front door.

Please make this happen. This would be a significant user experience improvement. Thank you.

That’s why I purchased the Echo Show 5. I thought I would see what caused the motion.

This is why I purchased the Show as well - assumed that this was built in. Afterall, Amazon owns Ring - why isn’t more tightly integrated?

Echo and Ring should put an option to automagically switch on the live feed when motion is detected at the ring camera. This will be a great step in the direction of competing with Nest and Google Home.

I would like to request Autolive view on Echo Show on Motion with the Ring.

At present I can only see ‘delayed’ live view when someone presses my doorbell. Would be much better if motion triggers the lvie view and gives us

Please hurry and add this addition, I really do not want to change all my devices to the Google eco system

Instead of alexa telling me there is motion at the garage how about an option to turn on auto pop up of camera. Instead of me hearing the motion alert… then saying alexa… then show me garage… by the time it connects… loading… the person has moved out of cam view (lousy). There should be an option on echo devices to turn on or off (Auto camera Popup).

Also when viewing a live camrea, and another camera detects motion it kicks me off the live feed and shows a motion notification… this is verry annoying also. how about a pop up that says motion detected would you like to view this camera??? While your in a live feed aleady.

My smartthings app on my smart tv shows me cameras as motion is dectected, why isnt this on echo devices yet?

I realize this is mostly Amazon Echo terratory but it involves Ring Cameras so figured id post here first… hopefully now that amazon and ring are together you can make things happen.

Keep up the good work RING !

I also would like the feature for a pop up video on camera detecting motion. I have a camera which views my front door & drive & it would be great to see who’s coming up the drive as soon as they enter the motion zone without having to activate it manually & the time I take usually means the reason for the activation has been missed

I want this feature as well

Thankfully the doorbell auto popup was added recently, but the feature we bought this for was auto popup on motion.

Please add this, how hard could it be?

There are no windows on the driveway side of our house. We bought a Ring doorbell to see motion in this area. This way we could see when guests/deliveries arrive. Please enable video from Ring to appear on Show when motion is detected.

It is possible, i did it with a routine .
See printscreen 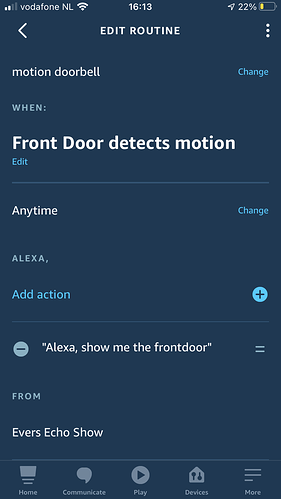 You could also change the command to answer the front door

Wow, this worked great. Thanks so much, never would have figured it out on my own.
I also have an echo show in Kitchen and BR. Is it possible to make all the echo shows do this without having to do the same routine for all?