I have a Video Doorbell Pro. If I switch to “live view” in the Windows 10 app, I’m not able to hear sound from the doorbell. (Yes, I clicked the speaker icon.) Same thing in “intercom” mode. I can see the live video feed.

If I play back the recording of the live view through the Win10 app I do hear sound, and “live view” works correctly on my Android phone. So the doorbell is fine, my PC speakers and volume level are fine, and the Win10 app is able to make noise. It appears that “live view” audio is broken in the Win10 app.

Anyone else seeing not hearing this?

Same thing here. Audio from doorbell to Win 10 desktop app is absent, though the sound is there when viewing it in History.

I have a Video Doorbell Pro. If I switch to “live view” in the Windows 10 app, I’m not able to hear sound from the doorbell. (Yes, I clicked the speaker icon.) Same thing in “intercom” mode. I can see the live video feed.

If I play back the recording of the live view through the Win10 app I do hear sound, and “live view” works correctly on my Android phone. So the doorbell is fine, my PC speakers and volume level are fine, and the Win10 app is able to make noise. It appears that “live view” audio is broken in the Win10 app.

Anyone else seeing not hearing this?

I have exactly the same problem with my Ring Doorbell 2. It was working fine for months, then stopped a few days ago. Maybe a Windows update changed something? I checked everything I could think of. I even reset the app, but nothing worked.

It would be amazing if Ring would help troubleshoot this! After all, we PAID THEM MONEY FOR IT! (just sayin)

Yep - Windows 1909 update KILLED sound. Sound *IS* recorded properly and works FINE on IOS devices - but since, the update the Ring App on Windows gets no sound. NOTHING WRONG with the doorbell. RING PLEASE FIX THIS APP ASAP.

Agreed!! This is very frustrating considering I just bought 3 floodlights and a Pro Doorbell.

Ring - where are you? This isn’t just a probem for me. So, what gives? Are you looking in to this problem or not? It’s super annoying that a brand new (1 month old) piece of hardware doesn’t work with the #1 Operating System in the world. C’mon and get with the program and fix the sound problem. It’s super annoying not to head anything but buzzing on Windows. And it works fine on my iPhone, iPad and Echo Dot.

Hey neighbors! If you are still experiencing this concern, could you please try the following:

For anything that is still persisting, please attach a screen recording of the no audio, but audio from another source (video in event history preferred, if not audio from Youtube or another video). This will show that it’s specific to the Live View where there is no audio coming from the app. Additionally, let me know what Ring app version you have, and what version of Windows OS you have.

Tried uninstalling, rebooting, reinstalling. No change: live view has no sound, but I can hear it when playing the recording in the Windows app (played it straight out of History after waiting a minute for the server to catch up). I did click the green “accept” button and toggled the speaker mute button a couple of times. I don’t have a microphone installed on my PC, so the microphone mute button just pops up an error. (You may want to try it on a PC without a microphone to make sure you guys didn’t get your muting wires crossed.)

Thank you for getting back to me and letting me know of this @fadden! After going over this with my team that looks into these concerns, they let me know of an important part of how the Windows 10 OS works with the Ring app. The Windows 10 Ring app uses your default communications device for audio. While every computer will have different audio devices, you will want to choose whatever one is the “default audio device” to also be the default communication device as well.

Video recordings use the default audio device, which is why you can hear the videos when you play them back without having to adjust any settings. Live View uses the default communications device, which sometimes isn’t set to whatever you have currently hooked up. 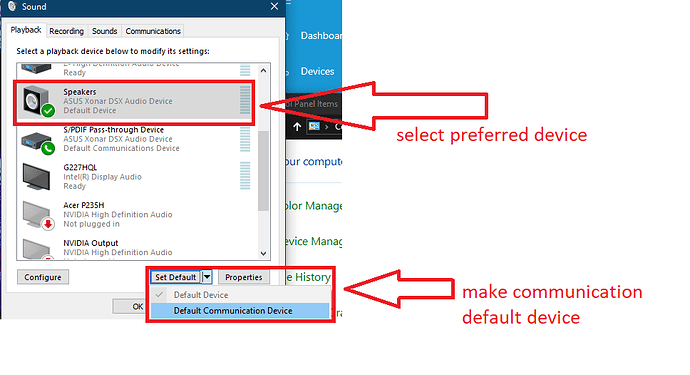 This was it. I set my speakers as the default communications output device and I can hear the live view again.

I have had this same issue for the past few weeks from what I recall. It worked perfectly fine for before that.

I have an external soundcard/amp powering my speakers that is set to my default audio device. I then have a web cam as my default recording/mic device. I can only hear recorded videos, not live audio or two way chat audio. The person on the other end can still hear me… but I cannot hear anything live (this is both when I toggled the little speaker and or choose two-way conversation with the green phone)

It would be very nice to have an audio setting in the app to be able to choose the audio & recording device within the app. I am not having any luck with fixing this when changing my default devices in windows. Please look further into this RING. If I have misunderstood your pervious answer to change my default recording device to the same as my default audio device - please clarify. This app was a big reason I choose RING over NEST, so I am sad this issues has arrised. Thank you.

Thanks for the solution. I decided to post here instead of starting another thread.

Sound with Live View works when I plug in headphones directly to the audio jack but, in my case at least, I only get a buzzing clicking sound when I use a USB wireless headset. The headset I use is the Logitech G533. It’s already set to my default communication device since I use it for online voice commuication semi-regularly. Is there any other step for I would have to do to be able to hear sound while using Live View?

Hi thank you for this reply. I have the same issue. No sound in live mode on Windows 10. I went into my settings and set the App output to Speakers (Realtek…). This is where the sound from my computer comes into my Bose speaker for my computer. There is no default option at the top. Can anyone tell me why the sound still is not working? Thank you.

I have just one device and it’s alerady deafult.

Thanks to all who posted about this, especially for the accepted solution(s). Since folks were still posting long after that solution was posted, I thought I would try to add an explanation, what worked for me. Like so many others I could not get sound out or mic in to work using the ring app on my Windows 10 laptop.

Those default windows settings can be tricky - it seems that every app accesses communications services differently. Even ring works differently for live view than it does, for example, when you play various choices for notification sounds in the app. For sound output on the PC I had three output choices and my laptop speakers and the output jack worked fine for things like media player, zoom, youtube, etc, - even in the ring app it worked for playing sample notification sounds - but not for ring live view. So, in control panel I changed the “default communications device” to the speakers/jack and still no help. For grins. I rebooted and then sound worked - ie with those new settings and after reboot!! Now I had sound sourced at my ring pro doorbell and coming through clearly on my PC laptop speakers and the aux jack, while in Live View in the ring app on windows 10.

Then I found that the laptop’s mic was not transmitting the other direction while in live view on the ring app on windows 10 - even though the mic worked fine for zoom. For grins I also tested the mic with the included windows 10 audio sound recorder and it did not work either. For some reason I had TWO mic choices in control panel, so I changed to the other one and disabled the one that was formerly active. At that time I also set the sensitivity to maximum (somewhere in that area, under properties or settings of the mic of choice in control panel). Windows sound recorder started working! But mic in ring app did not work yet, and finally I exited the app and restarted the ring app and now EVERYTHING works. Well, I still need to re-test zoom and some other functions. It’s possible I never had to reboot for the sound output, I may have only needed to exit the ring app and restart it. Hope this helps someone.

The Default PC Speaker device needs to be set as the Default Communications Device (per this thread).

Also when exiting the Live View Window, use the Red "telephone hang-up button at the lower left rather than the “x” in the upper right corner. When I use the “x”, I cannot reconnect for several minutes. But when I use the Red button, I can reconnect immediately.

This problem still persists, and no amount of uninstalling/reinstalling/restarting is helping.

I just bought 3 more cameras to use to monitor my kids while they are in their virtual classrooms; and to be able to “talk to them” while I’m in my office and doing my own teaching. (I’m a teacher, and have to do my own Zoom sessions with other students the whole day).

This is REALLY frustrating.

It’s the primary reason that I bought the additional cameras.

Thanks for this, I tried everything but then your comment on quadrophonic as my setup is 5.1 changed to Stereo and low and behold worked !! Shocker that the app cannot be modified to select the output / work with a 5.1 or quad setup like I think most probably have now its not the 80’s…

Thanks again for posting.