Hey @Mason345 ! This is a great request, so I’ve moved it over to our feature request board where it can be seen by our team along with other requests. We appreciate the feedback

GREAT! Vehicles today also have WIFI capabilities so yes if this can happen this would be AMAZING! Also a new line on helping to stop crime! I’m so excited! I hope it works out SOON! This can open the doors to so much! I.E…companies with work vehicles, government officials vehicles and employee vehicles, schools and daycare vehicles (we can see if a child is still on the bus! Inside video and outside!) The list is long for the possibilities! Also have you all thought about offering a ring device in the rooms of seniors living in hospital care so the family can check on them anytime? Sorry but there is just so much you can do with a RING device! ?

I love that you give the ability to add multiple motion zones, however, it would be extremely helpful to be able to customize the alerts based on zone.

For example, I want to be able to set one zone that captures all motion, all the time, but I do not care to receive alerts, just the recording. I also want to only receive alerts when motion is detected on my porch.

When will RBAC be implemented into the app?

As the admin, I would like to allow others to use the app to arm/disarm/panic, but not have access to turn off any functionality or view the event logs.

I would like to add my voice to ask for the feature of being able to turn of camera recording independent of the floodlights. I keep my Ring Floodlight shut off at the local switch as I do not need video of family members and pets clogging up my limited internet. I have installed Homekit enabled switch’s to control the Ring Floodlights power on and off depending on whether we are home or not. The Ring Floodlights switch’s are set to turn on when the last person leaves home and to turn off when the first person arrives home. This mostly works pretty well but we do not have access to the floodlights. We end up using flashlights around the outside of the house after dark so as not to use up all our internet data and for privacy reasons. I would be a happy customer if I could turn the camera part of the ring off independent of the lights. Having the camera’s automatically turning on when the last person leaves the home and turning off when the lst person arrives home independent of the floodlights would be great!!! Please consider making these changes so I do not have to purchase another brand of Security Floodlight. Please let me know if the company has any future plants to deliver these features. 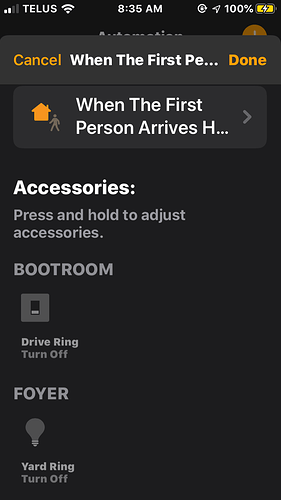 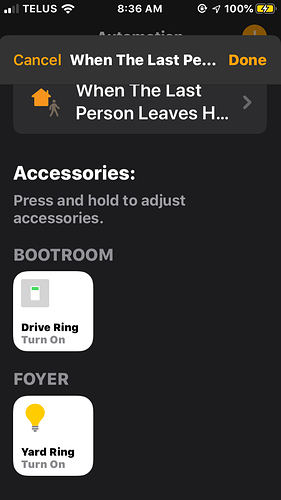 Would like to know if number 3 on mattinmd’s post is possibly being looked into. Neighbor across the street recently had a theft and the Sheriff was looking for any possible videos (Just recently installed the outdoor camera so did not have anything).

Would definately like to have it recording for movement on the street for this exact reason but would rather not have it sending alerts.

I really would like this feature - showing a thumbnail per camera in the widgets screen on IOS would be amazing.

I would really like the ability to trigger lights and sirens on multiple devices when viewing a doorbell. I have floodlight cams on side and rear of property, but we’re I to get an alert to an intruder or suspicious person on my doorbell cam, I would have to stop recording them and switch to each of the other devices to activate their sirens and lights.

Also, I would suggest the ability to leave a live view but with recording continuing for a short time after. On a single device, I may want to call the police, but continue to record evidence, and I don’t think that would be possible currently.

To add to this:
-All of the event histories should be filterable by date range, camera/device and type. This would allow for deletion of selected events/recordings instead of just “Delete All”.

Great info, neighbors! We’re going to combine this with our App Feature Request board

Badge notifications for the Ring App would be super helpful!

It would be nice if while setting up motion zones, you had the ability to setup a “time on delay trigger” for recording in a zone. For example, my camera is on my house atop a hill so it is angled down my driveway. The road passes in front of my house so I have 1 motion zone setup to cover my front yard without detecting passing cars. My problem is, if someone comes from the side to my front porch or on the landing, they aren’t always detected. I can’t extend “zone 1” to cover the area in “zone 2” because a passing car will activate my camera in the short time they are in the area. In the attached picture, you see 2 separate zones. It would be nice if when a zone is created, you can set a time for motion to be detected before it activates recording. It would be something like Zone 1 time on delay of 0ms, Zone 2 time on delay of 1500ms. This way the user could customize what motion starts a recording. 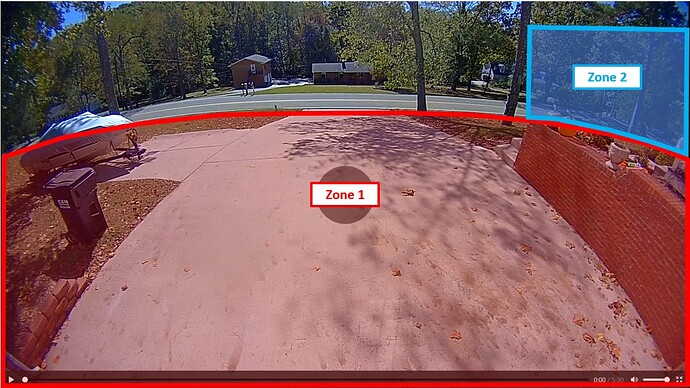 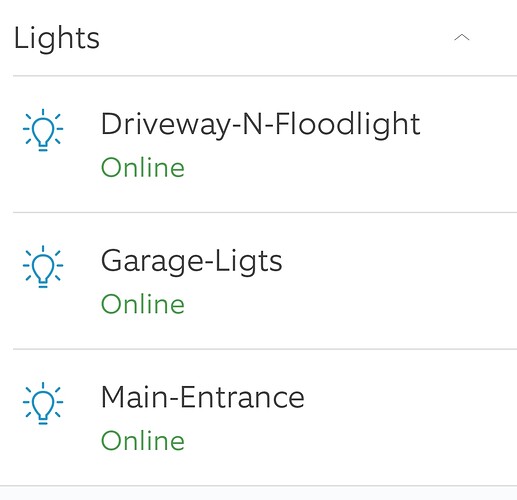 #1 feature need for me is with regards to recordings. All me, per camera, to enable motion alerts and records based on the security system’s armed/disarmed status.

Yes, I want the doorbell to record all the time.

No, I do not want the driveway camera to alert/record all the time, only when the system is armed.

No, I do not want my stick-up camera in the playroom to alert/record all the time, only when the system is armed.

Probably a common suggestion - I would like to be able to see a thumbail of motion recordings in my Ring App so I don’t have to load each one to even determine if its worth looking at.

Its quite time consuming to open each recording only to see a pet or car trigger a motion. Would rather just be able to delete these from a thumbail.

I just recently bought the Ring floodlight cams and doorbell set. I’ve installed the floodlight cams but I still use my Nest door bell because Nest shows image preview in the notication bar/ popups/Apple Watch when there is motion unlike Ring. Can you please add this feature. The ability to use see preivew with out opening is a game chager! 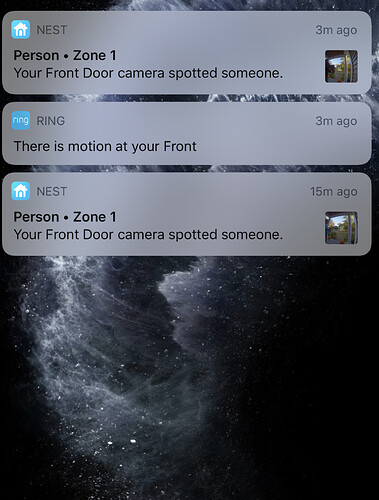 The Neighboorhoods app could benefit from better filtering and confirmation of posts before they go live. I know, this is probably super difficult but below are my reasons why. Lately I’ve found the Neighboorhoods part of Ring to be less and less useful because the signal to noise ratio is getting worse.

I’m running into a problem where there are so many false alarms or frivolous posting where it’s hard to know what is real and what isn’t. It seems like people are using it like a social network.

Specifically, I get posts asking if anyone knows whats going on down the street. Or “I heard a loud boom, anyone else here that?”

The worst right now is the constant reports of gun shots. If I were to believe the number of posts about shots fired I’d think I was in a war zone. It’s having a “boy who cried wolf” sort of effect in that I don’t take them seriously anymore and that’s going to cause a real event to go ignored when it actually does happen.

Is there a way for Ring to verify posts before they go live? I’d rather have a slighly delayed but confirmed post than a shower of bogus ones that drown out legit concerns.

I’ve taken to reporting these as inappropriate but I don’t like that solution either because I could make a mistake in the opposite direction and flag something that’s legit which is just as bad.

I’d like to have the ability to activate cameras based on my location using geofencing.

I have an indoor camera that I don’t need, or want, active while I’m at home … I’d like it to only be active when I’m away.