An outdoor (weatherproof) loud siren is needed as a Ring Security addition. It needs to be fully intergrated with ability to change siren audio, contol its function, etc.

I was going to but the interial siren but based on the reviews and lack of rich intergration and audible levels, I skipped.

Maybe use the Chimes an an alert device?

Unfortunately, the Ring Alarm system can only currently activate the sirens on the Alarm Base Station, and Keypads, and the indoor non-weather-resistant Dome Siren.

But you aren’t alone in wanting an external siren! Many others want an outdoor weather-resistant siren, or some ability to connect an exterior siren, or some way to have a siren sound outdoors . The more “Thumbs Up” Kudo votes they see there will better get their attention, increasing the chances of getting siren sounds outdoors. You should click the related links below and add your Kudo vote, if you like the requesting author’s idea (add your “Thumbs Up” Kudo vote on the left side of the author’s starting post), to help get the attention of the Ring Teams.

Submitted by DrTej and several others (similar requests merged into this request):

So, I immediately went to my Ring App to link mine also! But, I was briefly disappointed when I tried to do it because I did not initially see any change in the App. It initially appeared to still only make the cameras record when the alarm sounded . . . until I looked more closely. So, yes, the camera sirens CAN be linked now by:

Yep, being a UK user and fully invested in the Ring ecosystem, this is a massive game changer for me.
Incredibly happy that I can now have multiple internal and external sirens in the event of a break-in.

We are considering the Ring alarm system to compliment our numerous Ring cams over our large property, but only if detected motion will trigger one or more of the floodlight sirens. After reading your detailed remarks, I called Ring ‘product specialist (Tiffany)’ who said she was not aware of this new added feature. Aghhh, I hope you are correct and she just didn’t get the memo. Is there any more info to link to this new feature? Thanks. 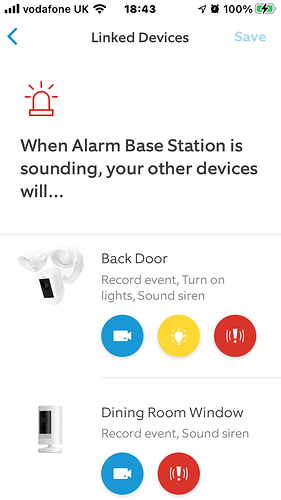 See screenshot from app. I have 11 internal/external linked devices set up to sound sirens when the alarm system sounds!