How to disenrol unknown device? 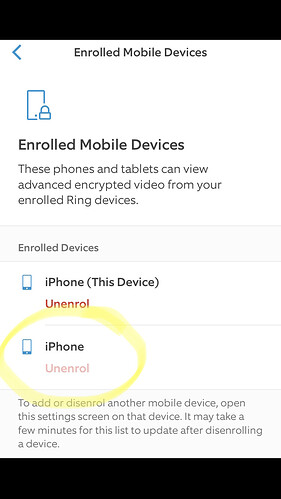 The E2EE bug you are describing in the IOS version of the Ring app also exists in the iPadOS version.

As you may have discovered, it probably seems like nothing you do will allow you to (permanently) delete the second mobile device. Even if you (momentarily) think you have finally succeeded in deleting the second device, you will probably discover that it has quickly re-appeared.

Sadly, the E2EE feature looks like it was cobbled together to provide Marketing/Sales with talking points, rather than being designed for the benefit of users.

It’s not clear whether much, if any, robust quality assurance testing was performed for the simplest E2EE case (i.e., one Ring device and one mobile device) – let alone stress-testing the E2EE feature using multiple mobile devices and multiple Ring devices.

Obviously, Ring needs to quickly fix ALL of the bugs in the E2EE feature (without causing users to lose access to existing video clips). Unfortunately, it’s often very difficult (if not impossible) to get Ring to fix serious bugs in a timely manner – assuming they are fixed at all.