Replaced my PRO 1 doorbell with this and for the first 10 days no issues I then noticed issues with the audio on live view and recorded motion events it simply had 0 audio, I hard reset the bell and the audio came back but because it was only 10 days old I got in touch with Amazon and they replaced, the replacement then suffered the same issue only 2 days of being installed again hard reset and it started to work again, as this was a replacement device I now knew the “device” itself wasn’t faulty it was either a network or hardware/firmware problem so contacted ring who did their checks and couldn’t see any network problems (packet loss etc.) and for the record I have no issues with my other Ring devices and didn’t with the PRO 1 and don’t have any issues with other devices connected to the router, however Ring did ask me to split the 2.4ghz and the 5ghz on my router and have the doorbell just work with the 2.4 so have done this and currently testing to see if the audio issue comes back, I was thankful to know someone else on a ring Facebook group I am part of also started to suffer the audio issues on the same morning as me so made me believe it’s definitely more leaning towards a software/firmware problem. I find it very strange that this is a new released product and suffering audio issues as I suffered the exact same problems with the 3+ when I bought that when it was released last year to so I believe there’s something about new release products and having teething problems at the start

Hi @Benlfc. Thank you for sharing this information. I will pass this feedback along to my team. I recommend that you continue you to follow up with our support team on your open support ticket. That will allow this concern to be diagnosed and properly tracked. Thank you, neighbor!

I’m glad I found this because I am having the exact same issue. 4/11 is the last day that i had audio on my recordings… After that all of a sudden, no audio. I can’t talk to anyone that rings my doorbell and all motion recordings have no audio. Were you able to get this fixed thru ring? Also…what are yalls reading on your transformer on the device health screen. Mine says good (16V) but will change to poor (15v) if the ring button is pressed.

I’m on my second one, and it lasted four days until it cut out again.

I understand there being issues with new-release products, but this is a device-breaking bug; kind of pointless to drop hundreds of dollars on a product that provides no audio.

Can someone from Ring (at least) give some insight as to how/when this will be fixed?

Completely agree…I was planning on upgrading to the cam plus subscription but now that this issue has popped up…not so sure now.

Also had same problem. I’ve not had any need to watch any footage back until yesterday. Then noticed absolutely no audio when doorbell was pressed.

It was connected to my 5ghz WiFi, swapped it to 2.4ghz and the audio is back. Been waiting for my replacement for 3 weeks now as there is broken glass in front of the radar sensor. Worst product I’ve had from Ring so far

Just want to chime in also to say that I had the same problem too, did a factory reset (hold down button for 15 seconds) and it started working again. Not sure how long the sound will last, if it goes again will consider getting a refund from Amazon until Ring decides to fix this issue. Clearly a firmware issue.

Another problem with mine is that I can’t even connect to my 5ghz wifi network whereas my old Ring Pro 1 could???

The no audio issue always returns within days.

Must be a firmware issue?

Exact same issue is happening for me too. Ring Pro 2 worked great first week but now recordings have no audio. I also have 3 security cameras w/floodlights which are working great with no audio issues. I’ve reset the camera a few times and changed to a 2.4ghz connection but the no audio issue returns. Will watch this thread for the fix.

Having the exact same issue. They can’t figure out what it is. Does anyone have any solutions yet?

Same issue here. Doorbell Pro 2 installed yesterday and was working fine, today no audio from recordings. I followed the advice from a few others and hard reset the unit and re-added it. Audio has been restored, but for how long?

Ring you need to respond to this!

Same issue with mine, bought from amazon UK a week ago and I just realised today that the recordings have never had audio.

I’ve done the hard reset as suggested above (thanks) and (after a software update) the audio is working again, but sounds like it doesn’t necessarily remain working…

Not impressed at all so far with this doorbell. The 3d mapping is terrible (the maps are indistinguishable, v poor quality images), Alexa greetings don’t work in the UK (found out in smallprint) , I’ve not had the email about the free faceplate as promised in setup and the app, and now this. Then to make matters worse, Amazon knocked about £50 off the price of it a couple of days after I bought it… OK rant over, but hoping Ring can make up for this poor start somehow.

I think after the hard reset it must of updated to their latest firmware which ‘may’ have resolved the no sound issue, will need to continue checking every day to be sure.

Play Amazon at their own game, return your ring doorbell and order a new one, that way you get your full refund and pay a lower price.

Phil, would you mind taking a look at the small sensor window which is directly below the main camera lens and see if it looks ok? There’s another active thread here about cracked glass and we’d like to know if they all look like this or if some of us have broken examples. Thanks! 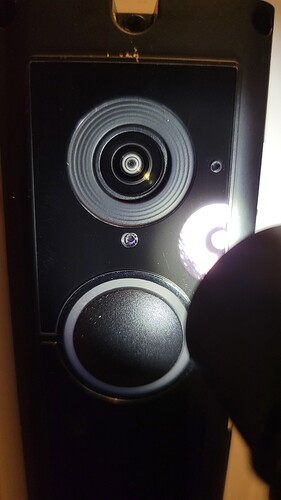 Looks like it has that same distinctive line, but seems to be a common pattern - I have had no issues with the image quality (although ‘colour’ night vision is laughable!), so would doubt it’s a genuine fault.

Re sending back to Amazon - def not worth the hassle! And obviously not Ring’s fault, was just a bit annoyed the other night!

Given that what appears to be a crack under the main camera, and several images. All have it in a different orientation so can’t be intentionally manufactured like that as they would all be identical in place.

Thanks Vienly, I had tried to resolve the NO audio problem on Video Pro Hardwired , (could not hear the person outside when answered) tried new set up numerous times before reading forum. This is very obviously a ring problem that was resolved by doing a hard reset, I also have a problem along with many others with the very dim ring light that would seem to be a hardware fault. I would imagine that many of these units have been returned since it is almost impossible to detect the spinning light during the day during setup., hopefully these units will be replaced when the hardware issues have been resolved. If this forum is being monitored by RING please advise your customers how to resolve these issues and save them hours of frustrating time. This product is definitely not the easy set up as described in the literature.

Hey neighbors! If you are having any issues with the doorbell’s audio not functioning as it should on the Doorbell Pro 2, we recommend turning off power for the Doorbell at the breaker for a couple minutes, and then turning it back on to allow the Doorbell to reboot and see if this helps the device’s audio quality return to normal. In additional to this kind of reset, you can also do a factory reset like @vienly has mentioned, where you hold down the setup button for 15 seconds, and see if this helps the device’s audio return as it should be.

In the event you are still having this audio issue, we recommend contacting our support team directly. Please give our support team a call at one of the numbers available here. If you are outside of the US, please go here to see how to contact support. Neighbors, please feel free to continue to share any feedback you have, as well as any other solutions provided by support that helped you reach a resolution!