Chat Support Not the Best

I got my Ring Pro Doorbell, installed it, and it’s been working fine. No complaints about the product. However, my doorbell was missing some hardware that kept me from completing the installation. The missing piece was the Torx security screw to secure the faceplate on the doorbell.

I contacted chat support and let them know about the missing part. They said “no problem, we’ll get that shipped out to you. It should take 2-3 days.” Awesome, I thought. 3 days later a small padded envelope was in my mailbox with my security screw or so I thought. When I opened the packet there were 4 one inch wood screws and three plastic mounting anchors. All had phillips screwdriver heads. None matched the picture in the installation instructions for the security screw.

So, back to Chat Support! This time I included photos of the screws I received and again described the part I was missing. “Sorry” they said, “we’ll get the right part shipped out asap!” About 5 days later another small padded envelope showed up in my mailbox. I opened it to find another screwdriver and 4 small screws seen in attached photo. “Finally!” I thought and proceeded to take one of the longer screws with the Torx head out to the doorbell to secure the faceplate. I inserted the screw which felt loose, like the hole was too big and turned it a couple of times. It stopped and became very hard to turn. I immediately knew it was cross threading. I thought maybe the screw’s threads were messed up so I grabbed the other one and tried it. Same result.

Back to Chat Support. As I described my problem the chat support person said my notes showed I was sent the T15 Torx screw kit, but I was supposed to get the T6 Torx screw kit… Apparently the first two support people either didn’t know by my account what kind of doorbell I had or didn’t bother to ask me because I got the wrong hardware.

I’m now waiting for the third packet to arrive and hopeful three’s a charm and I’ll get the part that fits and works. But I must say I’m not impressed with your Customer Support at this moment. They are friendly, but seemingly incompetent. It shouldn’t take 3 tries to get one screw replaced. But then the part should have been in the original box… I hope the doorbell is more realiable. 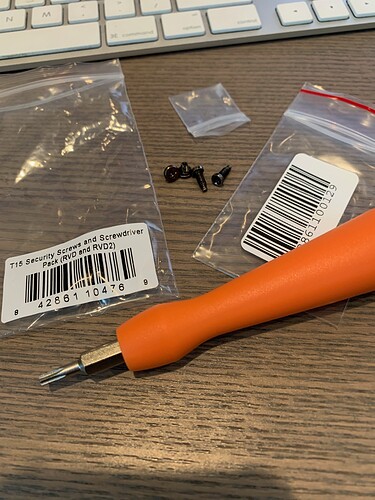