I’ve recently begun experiencing a major data usage bug with the latest version of the Ring app. Basically, even when connected to a strong and reliable Wi-Fi connection, the app uses mobile data to access/stream the camera feeds. Before finally realizing there was a bug in the app, I burned through over 3 GB of data in two days. I have been using the Ring app on this same phone with this same mobile carrier for years with no previous issues.

Today, I further tested the issue by installing a 3rd-party data monitoring app. I then viewed my Stick-Up Cam for about 5-10 seconds using the Ring app while sitting at my desk connected to Wi-Fi. Sure enough, the data monitoring app immediately showed that the Ring app consumed over 5 MB of cellular data as well as a small amount of Wi-Fi data.

Watching a 20 second YouTube clip or browsing Chrome just a few seconds later used zero cellular data, as expected, according to the same monitoring app. Interestingly, using the “Rapid Ring” app does not consume any cellular data, so the bug is limited to the full Ring app.

This really needs to be acknowledged and fixed by the Ring team. There are numerous other threads in this community as well as on Reddit describing the same problem. My 3 Ring cameras and Ring Protect Plus plan are now basically useless, and I’ve had to shell out additional money to replenish my mobile data allotment that the app consumed.

Hi @Padawan. Thanks for bringing this to our attention. I’ve shared this information with our internal teams for further review. I don’t have any information on this concern at this time, but a member of the Community team will update you when applicable. If you have any other questions in the meantime, don’t hesitate to ask! 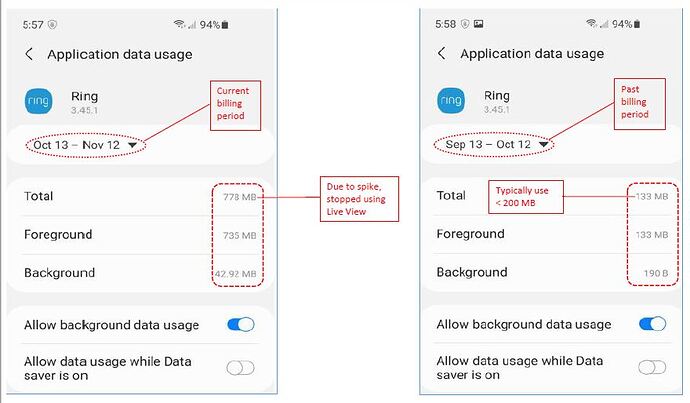 The attached snapshots show what I’m seeing on my mobile device – not as bad as with some Users, but definitely a matter of concern.

Here is a link to a discussion about many other users experiencing the same problem:

Hi, has anyone had the ring app use massive amounts of mobile data when at home on WiFi? Last night I went to bed and didn’t notice the app open on my phone in the background(I’ve done this before without a problem) but it was just on the dash board screen not live view or anything like that. I woke up to find it had used 4.8gb of my modile data(all of it) even though the phone was connected to WiFi. This is a little frustrating. I tried ringing Ring but got hung up on after an hour of being o…

Padawan-- Thanks for consolidating pertinent discussion threads and for your independent investigation.

Tom_Ring-- Your posted response is also appreciated. Once the issue is resolved, it would be beneficial for a member of the Ring Community team to update all affected Users who are following this discussion thread through a follow-up post, particularly since Users mobile data plans are being affected.

I am also here to report this exact same issue with Android 12. I just switched phone from version 9 and there is absolutely something wrong with the app, it just burns through mobile data even when on Wifi.

Please resolve as quickly as possible and post here when a new version of the app with a resolution has been released.

My Ring isn’t connecting to wifi FIRST while at home. I have a Samsung Galaxy and when I open one of my cameras, it shows my wifi at full strength and my data 4g both open - and it connects to my data while at home. I have to shut off my data because it’s using up my monthly plan in a few days!

Just downloaded the November 11th update of the Ring app and unfortunately it still suffers from this same bug. Even on a strong WiFi network, the app is streaming over cellular data.

I am experiencing the exact same issue.

Unfortunately, by the time I remember this is occuring, I’m already below 10% remaining on my mobile data plan. The only thing I can do is go into the Verizon LTE settings and disable mobile data completely (when I am home and on Wi-Fi) but this is a major inconvenience.

It’s really unbelievable that Ring refuses to provide an update on a critical issue affecting its users.

Same issue with me. Just spent 1/2 hour with customer service. Frustrating that they don’t get it!

@Marley_Ring @Tom_Ring You suggested in another discussion thread about this same issue that users should contact Support. Unfortunately, as noted above, Support is unable to provide any real assistance here.